RealAspen News and Community Content Feed
By Troy Hooper
Real Aspen – October 24, 2011
A nonpartisan watchdog group is blowing the whistle on U.S. Rep. Scott Tipton and others in Congress who consistently advocate for tax breaks, subsidies and other giveaways to oil and gas companies. Tipton could wind up representing part of Eagle County depending on a judge's redistricting ruling later this year.

Taxpayers for Common Sense rolled out advertisements last week asserting that, even during these belt-tightening times, energy companies receive about $15 billion in annual tax breaks and subsidies. These fiscal policies are wasteful and indefensible, Taxpayers for Common Sense asserts, and they say many Americans, even ones living in oil and gas-producing states, do not support the handouts.

“Republicans and Democrats, conservatives and liberals agree that these giveaways do not reduce our reliance on oil, lower gas prices, or promote innovation," Taxpayers for Common Sense President Ryan Alexander said. “They cost American families and taxpayers billions of dollars each year, they add to the debt and they show how a powerful industry gets special treatment in Washington.”

Meanwhile, a new Federal Election Commission data analysis shows Tipton, the Republican freshman representative for Colorado's 3rd Congressional District, received at least $27,175 from oil and gas interests and $38,075 from the energy sector overall in the recently completed third quarter of 2011. 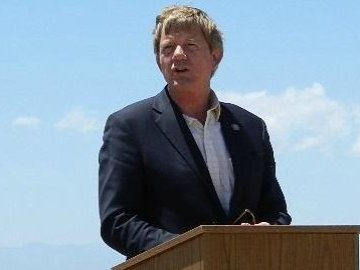 Oil and gas was the largest giving sector to Tipton from July 1 to Sept. 30, another watchdog group, Public Campaign, reported this week following The Colorado Independent's own review of special interests that bankroll the congressman's 2012 reelection bid. In addition to the numerous executives giving to Tipton, political action committees for ExxonMobil ($5,000) and Chevron PAC ($2,000) also contributed to the congressman's campaign coffers.

After a dismal second quarter fundraising effort, Tipton raked in $303,880 in the third quarter — 43 percent of which were donations that came from outside of Colorado, according to Public Campaign. He also took $13,650 from real estate interests, including several generous gifts from prominent Colorado real estate firms and agents.

So far Tipton is out-raising his opponent, Democratic candidate and state House Minority Leader Sal Pace, who reported $165,786 for the quarter that just ended for a total of $267,533 year to date. Tipton has raised almost $655,800 year to date and his latest report showed $111,388 in outstanding debt.

Joanna Burgos, a spokeswoman for the National Republican Congressional Committee, said Tipton has paid off some of that debt, but she ignored questions about the oil and gas interests backing him.

“Scott Tipton has sided with big oil companies, and Coloradans are paying twice for it – once in higher taxes to support Big Oil subsidies and then again with high gas prices at the pump,” said David Donnelly, national campaigns director of Public Campaign.

Oil and gas double-dipping is the point Taxpayers for Common Sense is making in radio spots on the Western Slope featuring two men discussing gas prices and the paperwork they prepare for Uncle Sam.

Man 1: Hey, can you believe these gas prices? $3.50 a gallon?!?
Man 2: I know. They're going up again.
Man 1: Yeah, it is costing me over 100 bucks to fill my truck. And, you know we pay twice for gas?
Man 2: Twice? What are you talking about?
Man 1: Well you pay once when you fill your tank and then a second time when you pay your taxes.
Man 2: When I pay my taxes? What?
Man 1: Yes, It's true. You pay twice because the oil companies that sell gasoline get billions in subsidies from Congress and those subsidies are taxpayer-funded – you and I pay for them.
Man 2: You're kidding!?
Man 1: Oh yeah, oil companies got $15 billion in subsidies from Congress just last year.
Man 2: That's just crazy! Why would they do that?
Man 1: Congressman Tipton, Americans don't want to pay twice for gas at the pump.
Man 1: Taxpayers for Common Sense is responsible for the content of this advertising.