“Having opposed the original Iraq war authorization in 2002, I am pleased with [Friday's] announcement that U.S. troops will withdraw fully from Iraq by the end of the year,” DeGette, a Denver Democrat, said in a prepared statement.

“Our engagement in Iraq has been a testament to the unflappable courage of our men and women in uniform, but it has also proven costly -- claiming far too many lives and misdirecting critical military and financial resources from where they were most needed.”

Total withdrawal came as a result of a breakdown in negotiations with the Iraqi government that would have left a training force in place in exchange for immunity from prosecution for U.S. troops. 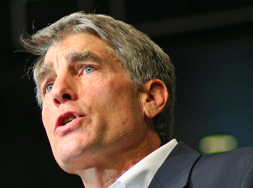 “I remain concerned about the security situation in Iraq and believe that keeping a limited number of U.S. troops in place to continue training and assistance would have helped sustain U.S. and Iraqi progress in stemming violence,” Udall said. “As a member of the Senate Armed Services Committee, I will continue to monitor the situation closely.”

Udall, then a member of the House representing Vail and surrounding Eagle County, also voted against funding the initial war effort, although he later voted to appropriate funds as the campaign continued for nearly a decade, costing 4,400 American lives and more than $1 trillion.

“I voted against the Iraq war, and I still believe that it ultimately harmed what should have been our military's top priority - our mission in Afghanistan,” Udall said. “However, once our forces were committed in Iraq, abandoning that country would have risked the security of the entire region.”

Leaving troops in Iraq without immunity does not make sense, Udall added.

“It is ultimately unacceptable to expect our troops to provide that assistance without immunity from prosecution in Iraqi courts, which has become a sticking point between U.S. and Iraqi negotiators,” he said. “Our troops have fought and died to establish a functioning democratic government in Iraq, and now we must respect the wishes of Iraq's leaders.”

“No doubt, the value of keeping military advisers in Iraq would maintain our military-to-military relationships to help provide stability and to buffer Iran's continued efforts to have influence in the country," Coffman said. "Although I'm disappointed that we are not having a contingent of U.S. military trainers in Iraq next year, the Iraqi demand that our troops be subject to the Iraqi justice system is inappropriate and unacceptable.”

Democratic Colorado Sen. Michael Bennet said, "Our troops have performed bravely and effectively in Iraq and accomplished everything that was asked of them, securing communities and creating the space for democratic change to begin to take root."

He added the withdrawal is yet another success for U.S. foreign policy under the current administration.

“This announcement represents another significant milestone for the country and U.S. forces, including the killing of Osama bin Laden," Bennet said. "However, serious threats against the United States remain, and we must continue to work to ensure we have the best-trained and best-equipped military in the world.”