RealAspen News and Community Content Feed
By David O. Williams
Real Aspen – October 18, 2011
Vail is still a month away from opening day, but snow guns were blasting away again this morning on Golden Peak – putting down a base for U.S. Ski Team athletes who will start training there early next month.

Beaver Creek snowmaking crews hope to start blowing snow tonight on the Flyway section of the Birds of Prey downhill course, where men's World Cup races are scheduled for Dec. 2-4. Vail opens to the public on Friday, Nov. 18, and Beaver Creek follows on Wednesday, Nov. 23.

The International Ski Federation (FIS) World Cup ski-racing season gets under way this weekend with a women's giant slalom on Saturday and a men's GS on Sunday – both on the glacier at Soelden, Austria, a resort that recently announced a training partnership with the U.S. Ski Team.

U.S. Ski Team athletes also have training deals with Vail – for the technical events of GS and slalom at Golden Peak – and Copper Mountain, where the speed events of downhill and super-G will be emphasized on a long dedicated track where snowmaking has been under way for a couple of weeks.

Copper Mountain opens to the public on Friday, Nov. 4 – as does Vail Resorts' Keystone ski area. Arapahoe Basin and Loveland are already open for the season, with limited terrain, and Wolf Creek is open on weekends. 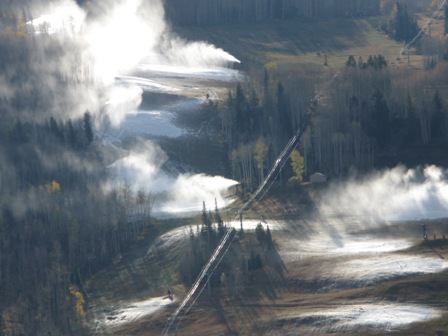 Snowmaking this morning at Vail's Golden Peak area.
David O. Williams
Colorado's northern and central ski areas got a blast of winter early Monday, followed by colder temperatures ideal for snowmaking. But the Colorado Powder Forecast is calling for more sunny and dry weather through the coming weekend and into next week.

Many of the top ski racers who will compete in Beaver Creek in early December – the only U.S. stop for the men each year – will be in action this weekend in Soelden.

“Soelden has always been a good race for me,” Ted Ligety, of Park City, Utah, told the Ski Racing Magazine News Service. Ligety, a gold medalist at the 2006 Winter Olympics in Torino, Italy, has been on the podium (top three) in Soelden every year since his first race there in 2005.

“It's a nice start off,” Ligety said. “It's one of the easier tactical hills and lends itself well to my style. So it's obviously nice to start there. Previous year's results don't count, but it's easier to do when you know you've gotten results there.”

Ligety has also done well in Beaver Creek, winning the GS here last year and finishing in the top five the last four years. Five-time Olympic medalist Bode Miller, of Franconia, N.H., also has wowed American fans at Beaver Creek – twice winning the downhill and once winning the GS. He'll be back to train at Vail in November and race the Birds of Prey course in early December.

Lindsey Vonn and Sarah Schleper, two Vail skiers who cut their racing teeth at Ski and Snowboard Club Vail, will open their seasosn in the women's World Cup GS at Soelden on Saturday and then return to Vail and Copper for early season training in November. The closest they'll come to racing here will be the Aspen Winternational Nov. 26-27. 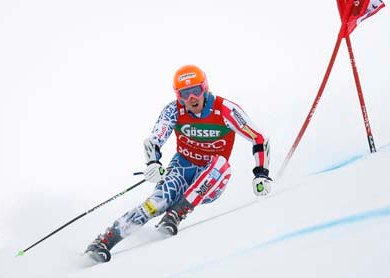 Ted Ligety training in Soelden, Austria.
U.S. Ski Team
“Soelden is one of the toughest giant slalom hills we race all season,” Vonn told Ski Racing Magazine News Service. “It's definitely the steepest hill and also pretty intimidating, especially being the first race of the season and having it be so difficult. It always makes me a little bit nervous in the starting gate.”

Vonn, who represents Vail Resorts as a ski ambassador, is last year's Olympic downhill champion and a three-time overall World Cup winner. Her weakest event is GS, although she did manage a podium result in the discipline last season.

Ligety, Miller, Vonn and 2006 Olympic GS gold medalist Julia Mancuso will all be in Vail Nov. 5 for a free public event to introduce the team to American racing fans.