Steamboat residents wary of oil and gas drilling as Shell, others eye nearby Niobrara formation

RealAspen News and Community Content Feed
By David O. Williams
Real Aspen – October 6, 2011
Residents of Routt County in northern Colorado – an area not known for its oil and gas development -- are gearing up for a major natural gas boom in the Niobrara Shale Formation. Activists are seeking guidance from more heavily drilled parts of the state as Shell and other companies eye gas extraction in the scenic Yampa River Valley.

“There are some new proposals for oil and gas development in the Niobrara Shale Formation around Steamboat, and they want to get themselves caught up [on regulations] and not be caught with their pants down the way other jurisdictions have been,” former Garfield County oil and gas liaison Judy Jordan told the Colorado Independent.

Shell has proposed putting in an exploratory well, and a company spokeswoman recently confirmed that Shell acquired several leaseholds in Routt and Moffat counties when it acquired East Resources last year. 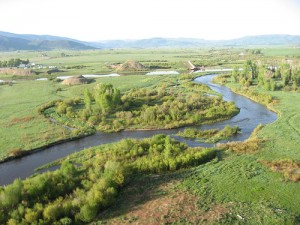 The Community Alliance of the Yampa Valley hosted a forum on oil and gas development late last month, inviting Jordan and members of Colorado's conservation community to speak about their experiences in other more intensively drilled parts of the state.

“The audience was interested in hearing about any lessons learned from across the state, including proactive mitigation strategies, public health analyses, water quality and quantity protections, and public comment opportunity,” said Frank Smith, director of organizing for Western Colorado Congress.

“Also, the county was encouraged to consider applying its 1041 authorities to better protect the Yampa River system, since that water is vital to many stakeholders and it's being targeted by thirsty entities -- upstream and down.”

Jordan was on staff when Garfield County rejected a request by attorneys for Battlement Concerned Citizens to invoke 1041 powers that have been used successfully in the past by counties seeking to acquire more local control from the state over major infrastructure projects such as water diversions and power lines.

La Plata County weighed using 1041 powers in the 1990s but opted instead for its own set of oil and gas drilling regulations. Now El Paso County has imposed a drilling moratorium in order to consider a set of local regulations – a move reportedly opposed by state regulators and oil and gas industry officials.

Jordan also was on staff in Garfield County – one of the top two most drilled counties in the state – when the commissioners decided not to finalize a University of Colorado Health Impact Assessment that showed the potential for significant public health problems in the face of increased natural gas production. She recommended to Routt County residents that they push for advance baseline sampling of domestic water supplies.

“Most of the contamination we found was naturally occurring. It's methane; it's created naturally,” Jordan said. “The question is whether the methane contamination that we see in domestic wells would have arrived if there hadn't been oil and gas development. I think it's unlikely that it would have, but it's difficult to make the case because basically you'd have to go in and examine different [gas] wells and no one would ever give us access to that kind of information.”

State regulatory officials disagreed with an independent consultant hired by Garfield County who found elevated levels of methane in groundwater supplies in areas where drilling had increased dramatically.

Jordan was fired by Garfield County in July – she says because of industry pressure.

Shell has long had interests in northern Colorado, aggressively pursuing water rights in the Yampa River Valley. But in the past the company has been primarily focused on its oil shale research and development in Rio Blanco County.

A Shell official last month told the Colorado Independent the company will consult community members as it moves forward with any natural gas drilling proposals in Routt County.

“Any future operations there will adhere to our global onshore operating principles, including those around footprint, community consultation, water, air, and overall safety,” Shell's Kelly op de Weegh said.

0 Comments on "Steamboat residents wary of oil and gas drilling as Shell, others eye nearby Niobrara formation"