RealAspen News and Community Content Feed
By David O. Williams
Real Aspen – September 29, 2011
Harmful, smog-causing emissions from the natural gas drilling process of hydraulic fracturing, or fracking, should be curtailed as swiftly as possible by the U.S. Environmental Protection Agency (EPA), conservation groups argued at an EPA meeting in Denver on Wednesday.

“Addressing air emissions from fracking operations is essential,'' National Wildlife Federation regional outreach coordinator David Ellenberger said in a release. “Each year the industry fracks more than 25,000 wells nationwide – including over 800 so far this year here in Colorado.''

EPA officials are taking public input on a set of regulations proposed in July that would require completions of wells to capture emission after drilling and fracking, as well as technology upgrades to detect and reduce leaks from natural processing plants, compressors and tanks. 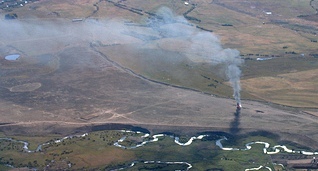 “The proposed rules include a requirement that would capture 95 percent VOC [volatile organic compounds] emissions from wells that are hydraulically fractured,” according to the EPA. “This dramatic reduction would largely be accomplished through capturing natural gas that currently escapes into the air, and making that gas available for sale. The rules also would reduce emissions of methane, a potent greenhouse gas, and air toxics, which are known or suspected of causing cancer and other serious health effects."

The EPA is holding another hearing on the rules today in Arlington, Texas. Industry officials say the rules would be prohibitively expensive and should be delayed.

Kimball also questioned the EPA's estimated price tag of $754 million in 2015 for the rules, which would go into effect in February, and potential cost recovery of $30 million a year in captured methane – a gas that the EPA estimates is 20 times more potent than carbon dioxide as a heat-trapping greenhouse gas.

Backers of the new rules say emissions from drilling and fracking are both a health concern and an economic issue. Whitney Coombs of NWF's Rocky Mountain Regional Center in Boulder said the state needs to safeguard its multi-billion-dollar outdoor recreation and tourism industry.

“People come to places like this to connect with wilderness, to hunt ,fish, ski, hike, climb and experience the great outdoors,'' Coombs said. “It's unlikely that people will want to spend their money in Colorado if you can't see the Rockies for the haze.''

U.S. Rep. Jared Polis, a Boulder Democrat, has gone on the record praising the new rules. Colorado freshman Republicans such as Reps. Scott Tipton and Cory Gardner have taken every opportunity to try to roll back EPA regulation aimed at the energy industry.

While the Colorado Oil and Gas Conservation Commission (COGCC) has taken steps to curtail emissions from drilling operations on the Front Range, environmental groups have questioned the state's handling of emission issues on the Roan Plateau on the state's Western Slope. And this summer environmental groups sued the U.S. Bureau of Land Management (BLM).