RealAspen News and Community Content Feed
By David O. Williams
Real Aspen – September 23, 2011
With profits soaring for hard-rock mining and oil and gas companies doing business on public lands, U.S. Sen. Tom Udall, D-N.M., is leading the charge to get the Government Accountability Office (GAO) to investigate whether American taxpayers are getting their fair share.

Udall, cousin of Colorado Sen. Mark Udall, sent a letter to GAO officials Thursday asking the agency to “undertake an examination of the value of minerals extracted and the amount of revenues collected in fiscal year 2010.” U.S. Rep. Raúl Grijalva, D-Ariz., also signed the letter.

“The U.S Department of the Interior manages approximately 700 million acres of subsurface federal minerals on public land and 1.7 billion acres on the Outer Continental Shelf,” the lawmakers wrote. “These minerals include hard-rock minerals -- such as gold, silver and copper -- that are available without having to pay a royalty. 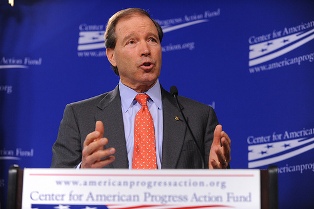 “It is vitally important that the American taxpayer receives a fair return for the mineral resources extracted from federal land.”

The lawmakers want the GAO to prepare a report on the minerals being extracted under the 1872 Mining Law, which does not require royalties, and various other mineral leasing acts. Specifically, they want to know:

• The amount of minerals extracted from federal lands and the Outer Continental Shelf and the estimated dollar value of those minerals.

• How much the federal government collected for those minerals, including royalties, rents, and bonuses, and how that amount was determined.

Mark Udall, who has previously co-sponsored legislation to reform the 1872 Mining Law, also would like to see uranium mining regulated under the Mineral Leasing Act, which does require royalty payments for the extraction of oil, gas and coal from federal lands.

Gold prices have skyrocketed in recent years, with Newmont Mining of Denver – the second largest gold mining company in the world -- seeing its profits double between 2008 and 2010. Environmentalists want such companies to pay royalties for mining on public lands.

“With record high metals prices and skyrocketing industry profits, it's time for mining companies to pay their fair share,” said Lauren Pagel, policy director for Earthworks. “When it comes to our public lands, we need sound fiscal policies, not an outdated mining law that lets mining companies fleece taxpayers out of millions.”

“Oil and gas companies are robbing American taxpayers blind,” said Matt Garrington, deputy director of the Checks & Balances Project. “ExxonMobil and BP are making billions and can pay a fair price for developing publicly owned oil and gas resources. The report requested by Rep. Grijalva and Sen. Udall is an important step to stopping the giveaway of our public lands to Big Oil.”

The American Petroleum Institute counters the industry is merely taking the same deductions and breaks available to other businesses, while seeking to offset the enormous up-front capital costs of oil and gas production.

“Contrary to what some in politics and the media have said, the oil and natural gas industry currently enjoys no unique tax credits or deductions,” API officials argue (pdf).

Superior post, keep up with this exceptional work. It's nice to know that this topic is being also covered on this web site so cheers for taking the time to discuss this! Thanks again and again! Канадска виза онлайн