Norman credits Philippon with extending his legendary links career using an innovative and minimally invasive procedure only recently coming into vogue in the United States. 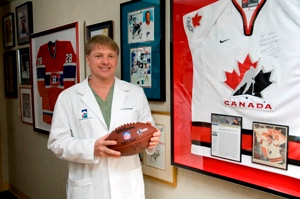 "(Marc) is a pioneer in terms of bringing science to the golf course, and the flexibility of the instruments he uses allows him to reach areas of the joint that were previously inaccessible. Before I came to him these methods weren't used for golf-specific injuries, but now it's a common procedure among professional golfers."

Philippon says the repetitive nature of a golf swing makes pros and weekend duffers equally susceptible to hip-joint injury and chronic pain, but the motion and violence of many different sports opens other athletes up to debilitating hip problems.

Essentially any activity such as skiing or ice skating that involves flexion, abduction and rotation puts undue pressure on the hip joint. Throw in the full contact of hockey or football and athletes can see their careers go the way of the great Bo Jackson.

After her gold-medal win in the giant slalom at the 2006 Torino Winter Olympics, ski racer Julia Mancuso had her hip scoped by Philippon, who acknowledges that "skiing is a risk sport." But he adds that diagnosing the problem early and using arthroscopy can keep young athletes active and avoid osteoarthritis and eventual hip replacement.

"The baby boomers were more active, generation X is very active, so we're seeing more activities early on like kids now at age 12 playing hockey almost every day," Philippon says. "If we catch it early enough, we can intervene surgically and non-surgically and hopefully prevent premature arthritis in their 30s and 40s and keep them active later in life."

Such statements fit seamlessly into the broader Steadman-Hawkins philosophy of preventing full joint replacements through exercise, diagnosis, arthroscopy and rehabilitation.

Which explains in part why Philippon joined the Vail-based clinic founded by renowned knee specialist Dr. Richard Steadman in 2005, coming over from the University of Pittsburgh School of Medicine's Department of Orthopedic Surgery.

Philippon was also impressed with the Vail clinic's emphasis on validating pioneering procedures through its nonprofit, science-based research foundation

"I've always admired Dr. Steadman for his ability to be on the cutting edge like with the microfracture technique," he says of procedure Steadman developed that uses microscopic incisions in the bone that allow stem cells to bubble up and form scar-cartilage to heal torn ligaments. "He pushed the research on that and now it's proven to be right."

Steadman, the official U.S. Ski Team physician who has prolonged the careers of athletes from Joe Montana to Dan Marino to Bruce Smith to Bode Miller, is an equally big fan of Philippon.

"He's been a world leader in hip maintenance and avoiding hip replacement. That's what he's pioneered," Steadman says. "He's figured out the reasons that people need total replacements and so now he can come in and correct that before they need it. It's just what we're doing in the knee, so it's an ideal fit.”

The following comments were posted on an older version of RealVail.com when this story first appeared in 2008:

It is good to know that there is hope for those of us suffering from hip/knee pain. I have been told that I need a total hip replacement. At what point would this type of surgery not be effective and where in the New York area is there a physician practicing Dr. Philippon's method of surgery?

Interesting, his 2.15 million dollar lawsuit was not mentioned.

There was a story on the lawsuit in the Vail Trail some time back, but its archive was apparently lost when the Vail Daily shut it down. As I mentioned in my editor's note, my profile of Philippon was written in 2006, before the lawsuit was resolved in, I believe, 2007. I'm sure A-Rod's people vetted Philippon and obviously still consider him one of the country's leading hip surgeons.

he is not the best in hip arthroscopy .there is a better surgeon in nyc his name is dr.bryan kelly.we did a lot of hip cases with outstanding result.

I can only imagine what my life would be like had it not been for Dr. Philippon. I had a very complicated problem at a very young age and he chose not to ruin my life. I was on a scooter, continual pain meds, and a tightrope of rest, ice, heat, exercise and misery for more than 2 years. The only remedy for my agony was a hip replacement, and he refused to do it because of my age.

Technological advances finally permitted him to resolve my disability with a resurfacing technique and device. I returned to my active lifestyle within a short time frame. I have no pain now, very few limitations, and a tremendous respect for his ability to heal the lame.

He is a wonderful, caring doctor. And I am not a famous athlete.

The comments about one, single suit in this litigous country, are obviously spiteful and tactical. Someone obviously has an anonymous axe to grind. Hmmmm

Then we have an unamed "better" Dr in New York. No name, no quantification, no known patients. Just an anonymous, proof-less claim Considering the research and vetting the literally hundreds of world class level athletes that go to Philippin do, people who have access and funds to see any Dr. in the world, it's evident which hip surgeon is likely the "best ".

The athletes Philppon works on can be seen performing week in and week out all over the world. The proof is on the TV every weekend.

Philippon is the hip surgeon of choice of the NHL, PGA, NBA, NFL, MLB, MLS, the English Premier League, the German Bundesliga and the US Ski Team.

These endorsements and the athletes that end up at Philippon's office don't randomly stumble into Vail, CO from all corners of the world. In pro sports, he's simply known as the best.

No other hip surgeon has his visible, provable success, his history, his experience (2,000 plus hip scopes), or his reputation.

Remember, if a hip repair will last or endure on a pro athlete, it will certainly last and work on the average Joe.

@Ruben - glad you like Dr. Kelly - exactly how is he better might I ask? Please note that he completed his fellowship in Pittsburgh under Dr. Philippon. (See for yourself on Kelly's website.)

It's really become almost worthless to read blog & website comments anymore.. people seem to just slander and spew with whatever ignorance and factoids they have managed to cobble together.

A family member has had 3 surgeries under Philippon.The first one was a success, but the second and third were not. I put it all down to a change in protocol for rehab (more aggressive), which I believe is inappropriate in many cases, especially non-althletes. As patient advocate, I was deeply disappointed that Dr. Philippon was unavailable either before or after the third surgery. Considering the failure of the second surgery, I had real concerns about the prognosis. His associate's answer? "The only thing that we can guarantee is that there is no guarantee." So although Mike has a point as far as the statistics of litigation, I wonder how many folks have the $$ to sue someone with such deep pockets, and who covers his bases with the "no guarantee" advisory. Philippon as surgeon? Never again.

Forgot to mention to the doubters of Dr. Bryan Kelly. You might want to look at the NY Times article of May 31st. Copy and paste the link below.

I had this surgery a week ago with Dr. Byrd in Nashville - arguably as talented and experienced with this as Kelly and Pillippon - and perhaps more so. I first saw Kelly. Let's just say that I might have had better treatment and attention had I been a professional athlete. I am not, but should I get less attention and care? My VISA works just as well! Just because someone is the "doctor to the stars" does not mean that the average patient will get the same care. It is true there are really just a hand full of OS's that are the top docs a this surgery, but after four failed surgery's, all I can say is go meet them for yourself, ask the questions, get on the Yahoo group blogs for FAI and hipscopes and decide who is right for you.

I had a labral tear and a Psosas tendon tear repaired by the best surgeon yet
Dr Struan Coleman Hospital for Special Surgery New York City -- Great results fantastic Dr and very personable. He also has a great staff --
Keith Brassel 7/24/09

I had 2 previous failed hip surgeries before seeing Dr. Philippon and he performed my 3rd and final hip surgery. He was excellent and lives up to his reputation. The rehab protocol pushes you and ultimately makes you better. Yes, there's pain, but as an athlete...no pain, no gain. You will have to push through some pain to get better and I think patients expect the surgery to just magically fix them. It doesn't, you have to work it and do exactly what he says - and if you do - Dr. Philippon is there until he fixes you. It may take more then 1 surgery but if he makes a commitment he sees it through until you are better. I recommend him as well as his PT team to anyone with chronic hip pain - he is the best!

Do your homework and you'll find a handfull of true hip scope specialists (Philippon, Kelly, Byrd, Stubbs, Sampson, Guanche, and some others). It's petty to pick apart different surgeons based on a star-list. In that environment, there's always a "more important" patient than you. Surgeon personality, integrity and dilligence go a long way- especially when the chips are down. I had a bad outcome on my first scope by someone (unnamed!) with many signed jerseys on his clinic walls and famous people around the waiting room, but luckily found the right surgeon who finally fixed the problem. Now I'm back and grateful to my physio and chiropractic for sticking with me!

To "been there done that:

You said: " wonder how many folks have the $$ to sue someone with such deep pockets."

Does it cost more to sue a more successful doctor? Your statement makes no sense. The cost of suing is the cost of suing, period. The lack of suits against Philippon tells the story. It would cost no less to sue a first year Dr. than Philippon.

Perhaps you should ask yourself why Philippon has the "deep pockets" you assert, as generally this income comes with success.

Phillipon scoped my right hip. Two years later a doctor unnamed scoped my left hip. My left hip feels two hundred times better than the one Philippon worked on. Philippon dropped the ball. I still have impingement in this hip to this day. His surgery was unsuccessful and they will never admit it. They attribute post-op pain to "tightness, tendinitis". Never will they admit a surgery went wrong but my body knows.
RealAspen News and Community Content Feed

1 Comment on "Hip doctor of the stars: Vail's Marc Philippon"

i underwent hip arthroscopic on the 16 july .by a dr called cakic from south africa.he sorted out al my complication i suffered for 4 years.i am back to normall and even better.i suggest if you can afford it .please visit him.he is magic