BROOMFIELD, Colo. -- RockResorts, a subsidiary of Vail Resorts, Inc. (NYSE: MTN), will continue its expansion into the tropics with the addition of Bimini Bay Resort and Marina, an existing 350-unit resort on Bimini, the Western-most island of The Bahamas. Starting March 1, the existing resort properties, restaurants and activities, as well as the largest deep-water marina in The Bahamas, will be managed through the company's property management collection, Legendary Lodging. Once the RockResorts hotel and spa are developed and completed, the entire resort will be branded as a RockResort.

Developed with traditional Bahamian architecture, Bimini Bay Resort and Marina is comprised of 350 individually-owned existing residences, many of which feature top-of-the-line, luxurious amenities, all within a relaxed and friendly neighborhood setting. Situated on the Northern tip of the island of North Bimini in the heart of what's known as “The Bone Fishing Capital of the World,” the resort is located on the closest island to the U.S. Mainland, only 48 nautical miles off the coast of South Florida, which is a quick 25-minute flight or a short one- to two-hour boat ride. With the largest marina in the Bahamas, Bimini Bay Resort and Marina is emerging as a hub for sport fisherman as well as for the broader boating and yachting community. 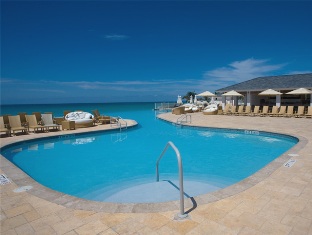 The resort also features three restaurants, a shopping village, the “Beach Bums” children's activity center, two outdoor pools, tennis and access to other activities, including scuba diving, snorkeling and boat tours. An on-site casino will be developed for guests that will be managed by a separate third-party group.

“This is an exciting time for RockResorts and our entire hospitality group,” said Paul Toner, chief operating officer of Vail Resorts Hospitality and RockResorts International, LLC. “Adding Bimini Bay Resort and Marina is another important milestone in expanding the profile of RockResorts as a leading player in luxury resort management and reflects our continued interest in expanding our resort and lodging operations outside of the United States, including into desirable warm-weather locations.”

Eleven of those properties are RockResorts with the planned addition of two more this year - Balcones del Atlántico in the Dominican Republic and Alma del Pacifico in Costa Rica. Founded in 1956 by Laurance S. Rockefeller and acquired by Vail Resorts in 2001, RockResorts has become known for its progressive environmental programs, as well as its welcoming and friendly guest service, exquisite spas and superb cuisine.

Klein and the team plan to begin instituting the company's industry-leading initiatives at Bimini Bay Resort and Marina, such as the Water on the Rocks program that eliminates nearly all of the plastic water bottle usage by guests, a voluntary guest donation program for local environmental projects, a volunteer vacation program called "Give and Getaway," a progressive sustainable cuisine program, a green guest room program and the soon-to-be launched “Go Green, Get Green” meeting and event program.

“The partnership with RockResorts as the management company for Bimini Bay Resort and Marina represents a new chapter for our homeowners, for our guests and for our community and the island of Bimini," said Rafael Reyes, President of RAV Bahamas Ltd. “As we look ahead to the future with plans to improve the guest experience and the homeowner experience, it was critical to us to select the right partner. RockResorts bring the perfect combination of experience in the luxury resort industry and environmental leadership.”

Health experts and professionals estimate that up to ninety percent of disease is stress-related. Perhaps nothing ages us more quickly, 출장마사지 효능

It is very rare that I am a direct fan of a gambling site, but now I have met an incredible betting casino, which I probably will never give up! I advise you to follow my link to the dr bet review page if you also want to get acquainted with this site and start playing on it. I promise you that after the first day you can withdraw quite a big amount of money to your card due to the cool bonuses that are constantly presented to players!

Choose your preferred online casino, such as https://ratemycasino.ca/casino-games/slots/red-hot-reels/, then download their app on the device of your choice. The whole screen will be taken up by the reels and control buttons for your slot machine, including spin and max bet. You may view your money in the screen's corner as well.

When getting started with live dealer casino games you are required to choose the table and dealer you prefer. Dealers are usually very good looking women; however there are also a few handsome men around to keep the ladies coming back for more. 온라인카지노

Thanks for picking out the time to discuss this, I feel great about it and love studying more on this topic. It is extremely helpful for me. Thanks for such a valuable help again. nearest school security guard

Nice post. I was checking constantly this blog and I’m impressed! Extremely useful info specially the last part I care for such information a lot. I was seeking this certain info for a long time. Thank you and good luck. price of c curl perm

You there, this is really good post here. Thanks for taking the time to post such valuable information. Quality content is what always gets the visitors coming. check more info here

I am happy to find this post very useful for me, as it contains lot of information. I always prefer to read the quality content and this thing I found in you post. Thanks for sharing. https://perfectdelivery123.blogspot.com/2022/10/nearest-shop-for-fresh-birthday-cakes.html

Great job for publishing such a beneficial web site. Your web log isn’t only useful but it is additionally really creative too. https://sites.google.com/view/fine-dining78/home?authuser=1

Awesome blog. I enjoyed reading your articles. This is truly a great read for me. I have bookmarked it and I am looking forward to reading new articles. Keep up the good work! nearest hair salon

Roulette(Roleta) is one of the most popular table games in online casinos. What attracts players to Roulette(Roleta) is that it does not require professional skills or complicated rules to join the game, let alone remember what the odds are. Whether you want to play roulette for free or for real money, trust our recommended roulette(roleta) casinos. You'll also get tips for playing different versions of the game, from live roulette to European he roulette. You can start playing free online roulette games right away with no downloads or sign ups. Click a game to start, or browse our free games gallery to see the full selection. You can play roulette for fun and get a feel for the different variants available.

Playing free online roulette games is also a great way to practice your strategy and improve your skills before betting online. Roulette(Roleta) is he one of the most popular games in casinos. It can be played with no prior knowledge and requires a bit of "luck" as well. Roulette games are divided into both European Roulette and American Roulette. The difference is that American roulette has a set of 00 numbers. When the game starts, the dealer invites players to place bets and the odds are calculated by the dealer. Players simply select the number they want to bet on. If you want to play this game, there are many ways to bet, such as: there are different odds for single numbers, odd numbers, even numbers, colors or combinations of numbers and how you bet.

Nustabet online casino offers more than just Roulette(Roleta). We have over hundreds of slot games, fishing games, card games, live casino, etc. In addition to these classic games, there are millions of red envelopes for players. Join Nustabet now and let's have fun together.