Tickets for the 2012 Vail International Dance Festival went on sale today at 11a.m. (MST), according to Vail Valley Foundation officials.

Performances will take place July 29 through August 11 at the Gerald R. Ford Amphitheater in Vail and the Vilar Performing Arts Center in Beaver Creek, while community events will be held in the streets and villages throughout the Vail Valley.

Under the leadership of Artistic Director and former New York City Ballet Principal Dancer Damian Woetzel, the 2012 Vail International Dance Festival (VIDF) will host a total of 10 performances. Tickets are priced from $12 to $90 and available online at www.vaildance.org or via phone at 888-920-ARTS(2787). Series and student pricing is also offered. 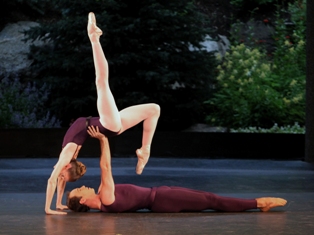 In addition, on Tuesday July 31, a special performance entitled UpClose: Stravinsky by Balanchine, will celebrate the 40th anniversary of the New York City Ballet's landmark Stravinsky Festival. This unique event focuses on the groundbreaking ballets created by George Balanchine to the music of Igor Stravinsky, ballets considered to be among the 20th century's most important and enduring works of art.

New work is a mainstay of Festival programming and following up on the sold-out Premieres performance in 2011, this tradition continues at the Gerald R. Ford Amphitheater on Monday, August 6 with NOW, an evening of premieres and recent works by choreographers including Christopher Wheeldon, Doug Varone, Matthew Neenan, Jill Johnson, Brian Brooks and the collaboration of Trisha Brown and Jodi Melnick.

“New works are an essential part of how dance remains a vital art form," said Festival Artistic Director Damian Woetzel. "This year we have a remarkable variety of innovative choreographers represented, and we titled this particular program NOW, recognizing the challenge and need for dance to relate to the present day."

The Festival continues on Tuesday, August 7 at the Gerald R. Ford Amphitheater with its annual popularly-priced evening, this year titled Dance for $20.12, at which every seat is $20.12 and lawn seating is just $12. This crowd-pleaser features a variety of Festival artists thrilling an always sold-out house.

The Martha Graham Dance Company presents a debut full-evening performance in Vail on Thursday, August 9, with classics from the troupe's iconic repertory. Dances to be presented in this debut evening include Appalachian Spring, Embattled Garden and Chronicle.

On Friday, August 10 at the Gerald R. Ford Amphitheater, the internationally-acclaimed ballroom stars Liana Churilova and Emmanuel Pierre-Antoine host a made-for-Vail showcase of ballroom styles with stars and champions from around the world in the exciting Ballroom Spectacular that can only be seen at the Vail International Dance Festival.

The 2012 Festival closes on Saturday, August 11 with the return of Dance TV, celebrating the popularity and success of dance on the small screen. The show features special guests and competitors from the world of television, in what is sure to be a rousing conclusion to the Festival. Performing on this commercial-free program are stars from hit dance shows like “America's Best Dance Crew,” “So You Think You Can Dance” and “Dancing With the Stars,” among others.

Throughout the Vail International Dance Festival, there are numerous free in-town performances and interactive events, as well as master classes and educational opportunities including the now year-round Celebrate the Beat dance education program for local students.

The complete lineup for the 2012 Vail International Dance Festival, along with artist information, photos and videos is available online at www.vaildance.org. Beginning today, tickets can be purchased through the website or the Box Office by calling 888.920.ARTS(2787).