RealAspen News and Community Content Feed
By David O. Williams
Real Aspen – June 29, 2011
Kids across America have some tough choices to make this summer, like which Crayola crayon should be used to depict benzene, or diesel fuel, or any of the 29 known human carcinogens used by the natural gas industry in the hydraulic fracturing, or fracking, process. 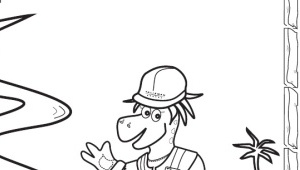 Meet Talisman Terry, the loveable dinosaur who playfully promotes the benefits of a controversial process that's provided much better access to his liquefied and gasified ancestors, but also comes with significant risks in terms of potential groundwater contamination – either through the fracking process itself (debatable) or all the residual fracking processes such as holding pits that frequently leak into ponds, rivers and streams (not debatable).

But as Mother Jones points out, the coloring book never uses the term “fracking,” which has taken on a negative connotation, or even names the process of hydraulic fracturing, which involves injecting up to a million gallons of water per gas well, mixed with sand and undisclosed chemicals, deep into the earth under very high pressure.

The so-called frack job fractures tight rock and sand formations and frees up trapped pockets of hydrocarbons. Critics say it's been known to contaminate much shallower groundwater supplies; industry officials deny that's the case. Many Democrats and even some Republicans, though, are taking an increasingly hard stand.

But don't tell that to Talisman Terry. He just wants everyone to have a safe day!

I would also motivate just about every person to save this web page for any favorite assistance to assist posted the appearance. คาสิโนออนไลน์สล็อต