RealAspen News and Community Content Feed
By David O. Williams
Real Aspen – November 14, 2010
BRECKENRIDGE -- Dreaming of a white Thanksgiving can be a bit hit-or-miss in Colorado. Some ski seasons it can be quite good in late November; others it can be dry as a bone. This particular season is starting to shape up as a very respectable Turkey Day given the slow but steady snowfall sifting out of the sky above the central Rockies of Colorado.

Editor's note: Since this was written and posted Sunday evening, Vail received at least six inches of new snow overnight and it was still snowing as of 7 a.m. Monday, Nov. 15.

I headed out with the family for our first official ski day of the 2010-11 season on Saturday, and the turns at Breckenridge were really good for this time of year. It was only the second day of the season for Breck, but already far more than the obligatory white ribbon was open for snow riders. 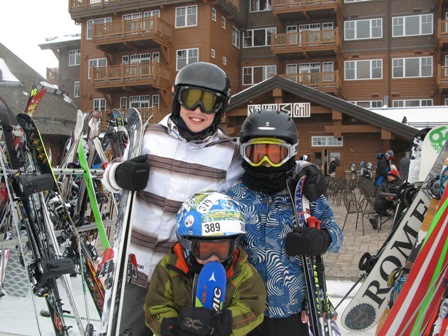 The Williams boys on Day 1 of the season at Breckenridge.
By David O. Williams
With light snow drifting down all weekend, Breck has 22 of 155 trails open and six of 31 lifts. Three inches of new snow fell over the weekend for a total of 20 inches in the past week, bringing Breck's settled base to 28 inches already. A total of nearly five feet (60 inches) of snow has fallen there so far this fall, making it one of the better starts to the ski season in recent memory.

Breck's opening Friday brought the number of operating resorts in the state to six, with Winter Park next up on Wednesday, Nov. 17. Vail opens Friday, Nov. 19, and rest assured, while no official announcements have been made, there should be quite a bit more terrain than just the usual Born Free trail in Lionshead.

That's because even though the snowfall has been light (as predicted by our Powder Predictor blog on Friday), the temps have been chilly – perfect for snowmaking.

U.S. Ski Team athletes returning from Levi, Finland, for more early-season training in Colorado will find much more terrain to train on at Vail's Golden Peak. And Beaver Creek crews have been able to get a great jump on the Birds of Prey course, where the top men's ski racers in the world will compete Dec. 3-5.

If you pay attention to no other competitive winter sports this season (after all, the next Winter Olympics aren't for another three years in Sochi, Russia), come check out Bode Miller in what could be his last hurrah on one of the toughest downhills on the circuit – a place where he's had great success. The Beaver Creek races are free and open to the public, which is not something you hear a lot in the ski world.

For instance, it's a bit pricey, but well worth shelling out a few extra bucks to hit the new alpine coaster at Breck this season. Much more than a mere alpine slide (Breck has one of those too, but only in the summer), the alpine coaster is an actual cart-like sled you sit in and fly down rails over a course that's nearly a half mile long.

You drop through the trees, twist, turn, hit some jumps, and if you push forward fully on both levers (pulling back hits' the brakes), you can get up some fairly decent speed – enough to give the kids a thrill (even the big ones).

I've taken my kids down to the alpine coaster atop the gondola at the Glenwood Caverns in Glenwood Springs quite a bit, and they love that one. But there's an added dimension with snow flying, skiers riding chairlifts nearby and snowcapped peaks all around. Check out the below video from Saturday for a better sense of what I'm talking about.

All in all, a really good first day out. Breck ski area has a lot going on this season with the addition of its new RockResorts property at One Ski Hill Place at the base of Peak 8 (also the location of the alpine coaster), so if you haven't been in a while, definitely check it out. And Breckenridge itself has always been one of my favorite ski towns in Colorado.

A desktop application and software that helps you update your maps, software updates, and comprehensive management of all Garmin devices is Garmin Express . you can simply download it on your system via garmin.com/express. Also, It will help you to register as well as sync your new Garmin devices and store fitness data.

A desktop application that provides a means for connecting with your Garmin devices up-to-date is Garmin.com/express . The installation of the latest Garmin updates for latest maps and software is vital as they help to incorporate important data into your Garmin nuvi, Garmin Rv, Garmin Dezl, or Garmin Drive device.

Garmin express app can be used for a plethora of purposes, from updating the GPS maps, Registration, managing content to loading songs to your wearable gadgets. A desktop application and software is Garmin Express that helps you update your maps, software updates, and comprehensive management of all Garmin devices.

I love the efforts you have put in this, appreciate it for all the great posts. เทคนิคการเล่นบาคาร่า

Red mercury is along these lines thought about a trick, executed by red mercury buyer extortionists who tried to exploit naïve purchasers on the underground market for arms.

Thanks for taking the time to discuss this, I feel strongly about it and love learning more on this topic. If possible, as you gain expertise, would you mind updating your blog with extra information? It is extremely helpful for me. rent a car beograd

Thanks for taking the time to discuss this, I feel strongly about it and love learning more on this topic. If possible, as you gain expertise, would you mind updating your blog with extra information? It is extremely helpful for me. how to become an iso for merchant services

Positive site, where did u come up with the information on this posting?I have read a few of the articles on your website now, and I really like your style. Thanks a million and please keep up the effective work. check this out

Wow, cool post. I'd like to write like this too - taking time and real hard work to make a great article... but I put things off too much and never seem to get started. Thanks though. merchant services sales representative

I think this is an informative post and it is very useful and knowledgeable. therefore, I would like to thank you for the efforts you have made in writing this article. Rechtsanwalt Kassel

I would like to say that this blog really convinced me to do it! Thanks, very good post. Umzugsunternehmen Bielefeld

Darknetweedstore.com is the fastest and convenient way in which one can order and receive weed without any interceptions to USA, uk, Poland, Ireland , France martian rocks weed

thank you for your interesting infomation. 먹튀폴리스

At the point when an individual is fixated on betting and has a habitual betting dependence, this can influence the actual soundness of the card shark. layarqq

Thanks for writing such a good article. Keep it up! visit

thanks for this usefull article, waiting for this article like this again. top credit card processors

This is such a great resource that you are providing and you give it away for free. I love seeing blog that understand the value of providing a quality resource for free. credit card processing sales jobs

This is such a great resource that you are providing and you give it away for free. North American Bancard ISO Program

I think this is an informative post and it is very beneficial and knowledgeable. Therefore, I would like to thank you for the endeavors that you have made in writing this article. All the content is absolutely well-researched. Thanks... merchant services sales advisor

wow this principled anyway ,I cherish your enter in addition to decent pics may be part personss contrary love being defrent mind add up to poeple , pgslot

For what reason do just such a great amount of composed regarding this matter? Here you see more. สล็อตฟรี

This is such a great resource that you are providing and you give it away for free. I love seeing blog that understand the value of providing a quality resource for free. judi online

Super site! I am Loving it!! Will return again, Im taking your sustenance moreover, Thanks. 먹튀검증업체

Thank you very much for this great post. www.methodikzentrum.com

Thanks for the blog post buddy! Keep them coming... Jensens Vac and Sew

Thank you very much for this great post. Jenna

Thanks for the blog post buddy! Keep them coming... SAC Start

Thank you very much for this great post. thesaffronbistro.com

Thanks for the blog post buddy! Keep them coming... Marcia Backstrom

Thank you very much for this great post. www.braquefrancais.org

Thank you very much for this great post. www.artemuseos.com

Thank you very much for this great post. www.paletteamps.com

Thank you very much for this great post. Folkadelics

Thank you very much for this great post. HansFund

Thanks for the blog post buddy! Keep them coming... Norstar

Thank you very much for this great post. Creekside