My reasons are mostly personal, like not wanting to abandon my family for weeks on end during the school year and the peak of our own ski season here in the Vail Valley.

But I’d be lying if I didn’t add that corruption, construction chaos, likely coastal weather concerns and potential for security mayhem also all factored into my decision not to pursue a gig at Sochi – a Black Sea resort with more palm trees than pine trees.

I’ve gone on the record advocating for high-alpine Winter Olympic venues that avoid the coastal mushiness of places like Whistler, where fog and soft snow plagued the alpine ski-racing events.

But nobody at the International Olympic Committee was listening, and so Russia is stockpiling snow and planning for temperatures in the 60s. 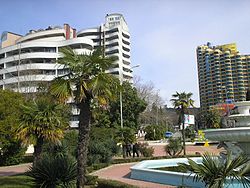 The palm trees of Sochi.

Last week, opponents of Russian President Vladimir Putin claimed that up to $30 billion of the overall $50 billion Olympic fund had gone missing – most likely siphoned off by Putin cronies. That could have some serious infrastructure ramifications for surrounding mountain resorts that have been basically rising out of the mud since 2007.

And let’s hope a lot of that missing money wasn’t earmarked for security, because Sochi is in one of the most volatile regions of the world. Russia has been cracking down on Islamic separatists in the area, but concern is running high after ethnic Chechans so easily bombed the Boston Marathon this spring.

I hope these Games go off without a hitch and I’m proven wrong. After all, I had similar concerns amidst the chaos leading up to the Torino Winter Olympics in 2006. But I think the best seat in the house for Sochi in 2014 will be in front of a tape-delayed television broadcast.

If you’re really dying to see (or ski) that part of the world, do it well before or after the Olympics have left town.

Well, Dave, you're an Olympic journalist vet, so you know as well as I do that there have been similar concerns about nearly every Olympic venue since the modern games began: Corruption, will the facilities be ready in time, will transportation break down, will it be too hot or too cold? I certainly respect your views on "high alpine" venues, but the Winter Games are not just about skiing - it's an international festival of sports and youth, and the games should be shared around the world in different places. I'm hoping for the best!

Hey Bob, thanks for the comment. Having been an insider working for the organizing committees at the last two Games, my take sadly is that the Olympics have become more about greed and commercial excess than youth and sport. I agree with spreading the love, but unfortunately that also means spreading the environmental devastation and rampant corruption so much money engenders. And the Russian record of brutal repression in Chechnya and Georgia may come back to bite them next year. I too am hoping for the best but expecting the worst in Sochi.