Raining on the Olympic parade: Why weather may give Colorado a leg up in bidding on 2022 Games

This is the third installment in a three-part blog on the Winter Olympics that first ran in the old version of Real Vail back in late March and early April of this year. Parts one and two were posted last week.

A game a lot of the jaded journalists covering the Olympic Winter Games like to engage in is coining the most derogatory nickname describing the shortcomings of the host city or venue. In Italy in 2006, for example, the purpose-built (by Fiat) and frankly quite hideous ski town of Sestriere became “Sewerstriere” or “Disastriere.”

At Whistler – scene of the alpine skiing, sliding sports and Nordic events at the Vancouver Winter Olympics in February – the best nickname I heard was “Pissler.”

Much was written about the miserable coastal weather at Whistler, where fog, rain and rotten snow plagued the lower reaches of the mountain during the Games, leading to the most delayed alpine skiing events in Olympic history.

Five of the ten medal events were postponed due to foul weather, leading to major headaches for organizers and fans – many of whom were forced to get on a bus at 5 a.m. in Vancouver for a 10 a.m. race in Whistler, only to arrive to a cancellation.

The degree to which global climate change contributed to the logistical snarl is debatable, but there's no doubt the warmth and wetness of a particularly prolonged El Niño weather pattern made for a soggy, unpleasant mess for spectators, athletes, journalists and organizers where I worked at Whistler Creekside for three weeks. 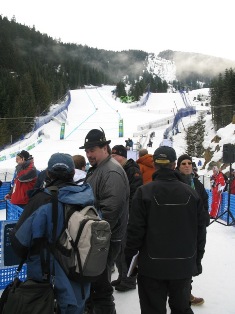 Journalists wait out another weather delay at the Winter Olympics in Whistler.
By David O. Williams

“It's definitely not ideal having Olympics in coastal regions like that, at least from the alpine [skiing] side of things, because it's such an outdoor sport and plays into all those variables of weather and definitely makes it difficult as athletes,” said Ted Ligety, a 2006 gold medalist at Sestriere who hails from much higher, drier (but still snowy) Park City, Utah. “If we held races in Utah, you'd never have a single cancelled day.”

Ligety, while admitting the hypocrisy of flying around the world to ski race, has been working with the World Wildlife Fund to help spread the message of energy conservation to slow global warming. Whistler, however, would have been soggy regardless.

And a lot of people knew that going in. In my three or four trips to Whistler previous to the Olympics I always left scratching my head, wondering why the place is always top-ranked in ski magazine reader surveys. A resident of Vail, I could never figure out the allure of skiing in Hefty bags or seeing moss on the trees.

In 1995, in fact, the International Ski Federation pulled the plug on World Cup ski racing at Whistler because of the vagaries of the lower-elevation coastal weather. Denver is more than twice as high as the base of Whistler (2,140 feet), and the base of Vail (8,120 feet) is higher than the top of Whistler Mountain (7,494).

All of this adds up to a serious competitive advantage for Colorado resorts and other interior winter sports destinations with dry continental snowpack – not only for hosting future winter sports events, but also from a pure business standpoint.

“The ski industry is a business and never really had much interest in there being climate change,” said Auden Schendler, director of sustainability for Aspen Skiing Company. “It's a threat to our existence. But over the last decade we've been studying the science and, really, if you come at it from scratch, you realize it's unequivocal it's a problem.”

Trying to host Olympic Games even in Europe – where the base of places like Sestriere are around 6,600 feet – may become increasingly problematic, Schendler says.

“Vancouver is just one example of what's going to happen to the sport, and that is that you're not going to be able to hold events at lower elevations. In Europe there are already resorts that have closed down and they've cited climate change as the problem,” he said.

“The resorts in Europe tend to be lower. In Vancouver, yes, you've always seen El Niños and it's warm at lower altitudes at coastal resorts, but this was a durable, long El Niño that even people working at the mountain have said was surprising.”

Likewise, the world seemed surprised when Cypress Mountain just above Vancouver at a base elevation of 2,990 feet was scoured by sheets of rain during the Games. Site of freestyle skiing and snowboarding, Cypress – which was quickly dubbed “Depress Mountain” – is known for very iffy conditions, according to most locals I talked to.

Putting aside the irony of the so-called “Green Games” flying in snow by helicopter at huge expense, locating such high-profile events there would be akin to a Denver 2022 Olympic bid putting all the freestyle events at tiny Echo Mountain near Evergreen. Close to the city and very geared toward the jibber set, but hardly a world-class venue.

At least Echo's elevation is decent at about 10,000 feet, so manmade snow would hold up. Sochi, Russia, site of the 2014 Winter Olympics, may not be able to say the same.

“It's definitely difficult,” Ligety said of low-elevation ski races. “But it's good to go to some different places like Vancouver, and Sochi will be neat as well. But obviously on the global warming side of things the resorts in Sochi are a little higher elevation – at the least the base – from what Whistler is, but it's one of those things you never quite know.”

Actually, Rosa Khutor ski area, just 30 miles from the palm-tree-festooned beach resort of Sochi on the northeastern shore of the Black Sea, has a base elevation of only about 1,900 feet and a summit elevation of 7,611.

Despite the sometimes massive snowfall totals of the Caucasus Mountains, coastal conditions can be very challenging for ski racing or even just recreational skiing. Even the more reliable climate of Colorado is becoming warmer and drier, Schendler said.

“So you combine that with warmer nights, which makes snowmaking difficult, even at altitude, and then add in compressed seasons, and not only are winter sports events in trouble, but you've got an economic problem for the business,” he said.

0 Comments on "Raining on the Olympic parade: Why weather may give Colorado a leg up in bidding on 2022 Games"