RealAspen News and Community Content Feed
By David O. Williams
Real Aspen – December 9, 2011
Contemporary western artist Carrie Fell always had a vision of what her dream gallery space in Vail would look like. She sketched it in her journals and has long pictured the space in her mind's eye. She just never dared think it would be in the glittering new epicenter of Vail Village known as Solaris at Vail.

Calling it a “Cinderella” scenario that landed her prime gallery space on the second floor overlooking the ice rink and summer plaza area, the Denver artist is clearly ecstatic that her ultimate dream has come true.

“I think the Solaris space is wonderful,” Fell said recently. “It's an area for the community to gather…and gathering places create energy and they instill love, encourage all kinds of new relationships and foster families coming to Vail.” 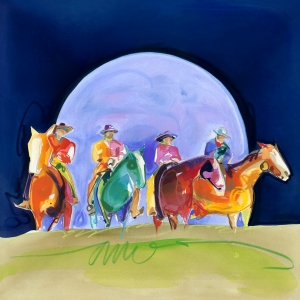 Fell was speaking during a fundraiser for a Vail childcare center called the Children's Garden of Learning, where she takes the time to visit the school and work with the young artists to create works that are then auctioned at her gallery.

“This space for me, it's going to hold lots of events like this,” Fell said. “It's intended to do that, it's intended to mimic in a small way what Solaris wants to do, so I want a make it a nucleus of just a small element of what's going on downstairs.”

Besides its public plaza, which will host a free concert by Jakob Dylan tonight, Solaris has Cinebistro movie theaters, stylish high-tech bowling at Bōl, and now a wide variety of new shops, restaurants and galleries.

“Carrie Fell is an artist of the 21st century New West — just as Remington and Russell portrayed their New West in the 19th century,”reads her bio on fineartworld.com. “Her dramatic use of color and line give life and feeling to her faceless subjects, from longhorns to cowgirls.”

Similarly, the Carrie Fell Gallery (website coming soon) will no doubt inject color and life into Solaris at Vail, which already has done the same for Vail Village.

Editor's note: A version of this blog first appeared on inspirato.com

American comedian, writer, actor, director, and television producer Larry David net worth won two Primetime Emmy Awards in 1993 for his collaboration with Jerry Seinfeld on the television series Seinfeld. David gained further recognition for the HBO series Curb Your Enthusiasm, which he created and stars in as a semi-fictionalized version of himself. David has written or co-written the stories of every episode of the improvisational comedy Curb Your Enthusiasm since its pilot episode in 1999. Formerly a comedian, David went into television comedy, writing and starring in ABC's Fridays, as well as writing briefly for Saturday Night Live. David has received a total of 27 Primetime Emmy Award nominations, as well as three Golden Globe Award nominations. He was voted by fellow comedians and comedy insiders as the 23rd greatest comedy star ever in a 2004 British poll to select "The Comedian's Comedian" and was awarded the Laurel Award for TV Writing Achievement by the Writers Guild of America in 2010. Since 2015, David has made multiple guest appearances on Saturday Night Live, playing 2016 and 2020 U.S. presidential candidate Bernie Sanders.

This is amazing, congratulations on another milestone. Please keep me advice on new events.

The quality and quantity of work produced in here is absolute informative. Thanks for sharing. My site:: 먹튀검증커뮤니티

please keep us posted when you post something like that!
شات العراق
شات
دردشة
شات صوتي
دردشة عراقية
شات عراقي