Editor's note: This is part two of a three-part series of blogs on the Vancouver Winter Olympics and Denver's prospects of a successful bid for the 2022 Games. Part one ran Wednesday, and the entire series was originally posted on the old version of Real Vail in April.

The 2010 Vancouver Winter Olympics were essentially two different Games - the Vancouver and Whistler Olympics – separated by a mere 70 miles and an unnecessarily difficult mass transit mess that took more than three hours to navigate. 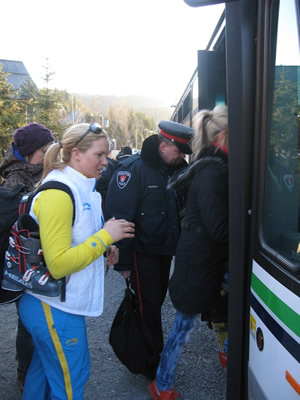 Six-time Olympic medalist Anja Paerson gets on a bus in Whistler in February. Trains were not an option.
By David O. Williams

The inexplicable, and to me indefensible, decision to shut down part of the scenic Sea-to-Sky Highway to most private vehicle traffic isolated the mountain resort area of Whistler – host to the sliding, Nordic and ski racing events – from the vibrant metropolitan area of Vancouver, which hosted hockey, skating, freestyle skiing, snowboarding and curling.

It would be the equivalent of shutting down Interstate 70 between Denver and the mountain resorts of Summit and Eagle County in Colorado and inviting the world to come enjoy a grueling three-hour bus ride. That, to me, is simply an unacceptable scenario if Denver wants to seriously consider hosting the 2022 Winter Olympics.

Harry Dale, an engineer and former telecommunications project manager who's now a Clear Creek County commissioner and president of the Rocky Mountain Rail Authority (RMRA), agrees. The only reason he thinks Colorado should even consider such a bid is if it results in a massive influx of federal funds to build a mountain rail system.

“You've got to come up with a plan that is going to be able to move people effectively, and I don't think just shutting the highway down and running buses is much of a plan,” said Dale, who helped build the video distribution network prior to the Salt Lake City Winter Olympics in Utah in 2002.

Having just completed a grueling high-speed rail feasibility study examining the possibility of such a system along the Interstate 70 and Interstate 25 corridors in Colorado, Dale noted Salt Lake City not only landed funds for highway improvements, but also built light rail and some commuter rail as a result of the Games.

Colorado voters in the 1970s rejected the Winter Olympics after the International Olympic Committee had already awarded Denver the 1976 Games, in part because of the massive tax burden and a perceived lack of infrastructure funding to accommodate huge Olympic crowds and the subsequent development.

As a result, Denver may have cost itself a shot at not only the 2018 Winter Olympics, which the United States Olympic Committee decided to forego in order to focus on a failed 2016 Chicago Summer Olympics bid, but some observers say it lost any realistic hope of landing any future Games.

Vancouver and Whistler, in my opinion, walked away with very little for $6 billion. Dale's $20 billion price tag, incidentally, is about what high-speed rail would cost along I-25 and I-70 – the conclusion of the RMRA study released this week.

A reporter for the Olympic News Service working the alpine skiing events at Whistler, I flew into Seattle in late January to save a few bucks, see family in Bellingham, Wash., and slowly make my way up the coast to Vancouver. Flights into Seattle were half as much as Vancouver (already the victim of Olympic markup), and Amtrak between Bellingham and Vancouver was a mere $19.

Of course, the slow-moving, heavy diesel trains took more than two hours to cover the mere 45 miles between the northern Washington city and Vancouver, British Columbia, but the ride along the Sound is beautiful, peaceful and generally relaxing. I wasn't in a particular hurry.

The problem, Dale said, with putting passenger service on existing freight rail corridors is that people generally are in a hurry. Heavy, slow-moving trains built to survive collisions with freight trains or derailments in freight corridors often only get up to about 45 mph, which most car commuters can top even in the most onerous of gridlock.

That type of car congestion was obviously what the Vancouver Organizing Committee (VANOC) was trying to avoid by turning the Sea-to-Sky Highway into one big bus lane, but that's a terrible way to show off $570 million in improvements that merely widened what is still a very meandering route to one of the world's top-rated ski resorts.

Once in Vancouver I was dismayed to discover passenger rail service to Whistler wasn't even an option, shut down earlier in the decade as a money loser. The only way to ride the rails to Whistler was on an invite-only train sponsored by the province of Alberta.

When I worked the 2006 Winter Olympics, at least you could catch a train (occasionally even a French high-speed TGV) between Torino, Italy, and the mountain town of Oulx. Once there, everything broke down with lumbering bus service navigating narrow, twisting Alpine roads, but at least rail was a partial option.

Closing I-70 between Denver and Colorado's ski resorts isn't feasible. It's a major interstate trucking corridor and the only real way to get between the metropolitan areas of the Front Range to the more than 20 Western Slope ski areas.

Even though I live in Vail, my own vision would be to spread the Olympic love throughout Colorado ski country with events all over the state. We would wind up with an interconnecting rail system that would give Colorado a winter sports competitive edge for decades to come because of our high altitude and lower travel costs in an era of rising fuel prices and global warming.

The alpine skiing could be held at Vail and Beaver Creek, which already has one of the top downhill courses in the world. Aspen, which dedicates all of Buttermilk to the X Games, could host snowboarding, ski cross and boarder cross. Winter Park, a Denver City and County-owned resort that already has rail access and one of the best mogul mountains in the world at Mary Jane, could host freestyle moguls.

Steamboat Springs, because of its tradition of producing Olympic athletes and its dedicated Nordic ski jumping facility at Howelsen Hill, could host those events, as well as cross-country skiing and biathlon. Breckenridge, or one of the other Summit County resort towns, could host all the sliding sports: luge, skeleton and bobsled. All skating events and curling could be held at Denver's Pepsi Center, which should not be wastefully rebuilt within what still would only be a couple of decades of first opening.

Existing freight rail lines, or old corridors that could be revived (like the one along Highway 82 in the Roaring Valley to Aspen), connect virtually all of the mountain venues. Some, like the southern line from Pueblo to Dotsero could serve not only as tourist trains but commuter rail lines for workers who live in lower-cost towns like Dotsero and Leadville but work in resorts in Eagle and Summit counties.

Tie it into a major regional airport like the one in Eagle County, which has spent millions in the last decade to expand runways and build a state-of-the-art air traffic control tower and radar system and destination tourists could be removed from the day-skier snarl between Denver and the ski towns – for a fraction of the cost of high-speed rail along I-70. That cost is estimated at $16 billion between Denver International and Eagle and $9 billion just to Summit County.

“A lot of people have said the only way you're ever going to build a transit system in the I-70 corridor is to get an Olympics because that will create the motivation to do it,” Dale said. “I think when we to $10 a gallon for gas in the next five to 10 years that might do it too.”

Thank you for sharing such a good information. Very informative and effective post. Keep it up!
salesforce admin training

Write Great article. You are such a Great blogger and your website is inspiration for me to start a blog. This article is very helpful for us.

Thankyou for sharing the information. Website is so easy to use – I am impressed with it.
Aws course

Thank you for sharing such good information. Very informative and effective post. Keep it up!
cyber security course