RealAspen News and Community Content Feed
By David O. Williams
Real Aspen – September 7, 2011
Despite the recent round of wet weather in Colorado – including some snow above 12,000 feet – Colorado politicians and fire officials warned fall can be one of the most active seasons for wildfires. Like Texas, southern Colorado is suffering through brutally dry conditions.

“We shouldn't let the recent cool weather fool us; fall wildfire season is upon us again, and this year's extremely dry weather -- particularly in drought-stricken southern Colorado -- means it's important to be especially vigilant,” Colorado U.S. Sen. Mark Udall said Tuesday in a release commemorating the one-year anniversary of the Fourmile Canyon Fire near Boulder.

That blaze destroyed 169 homes -- including one owned by Vail Town Manager Stan Zemler -- and is the costliest in Colorado history in terms of property damage. Udall at the time called for a federal investigation of how the fire was handled, and the Boulder mayor placed some of the blame on global warming and the state's ongoing mountain pine bark beetle epidemic that has left millions of acres of trees dead or dying. 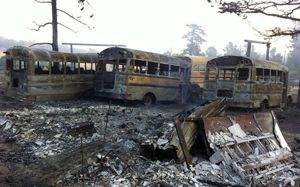 “After touring the site last year, I was struck by the fire's intensity and the heartbreaking loss of property,” Udall said Tuesday. “My thoughts are with the victims of the fire, many of whom are still struggling to recover.”

Gov. John Hickenlooper also warned that the state is still susceptible to devastating wildfires this time of year. Colorado's Front Range just experienced one of the hottest and driest Augusts on record.

“The Fourmile Canyon Fire in Boulder County, which started on Labor Day last year, is a haunting reminder of the impacts wildfires can have on our natural resources and communities,” Hickenlooper said.

Meanwhile, Texas firefighters are still struggling to cope with the worst wildfires in that state's history. According to ABC News, more than 1,000 homes have been destroyed and four people have died as winds from Tropical Storm Lee whipped up massive walls of flames over the weekend.

Scientists warn that extreme drought conditions and weather events will become more common as the planet continues to warm, but Perry has emerged as the GOP frontrunner for the 2012 nomination by casting doubt on global climate change science.

Perry on Tuesday also took a jab at the Obama administration's response to the fires in his state, meanwhile failing to mention the draconian cuts he and Texas state lawmakers have made to funding for state firefighting.

Took me time to read all the comments, but I really enjoyed the article. It proved to be Very helpful to me and I am sure to all the commenters here! It’s always nice when you can not only be informed, but also entertained! Mayumba National park

What a fantabulous post this has been. Never seen this kind of useful post. I am grateful to you and expect more number of posts like these. Thank you very much. Formation Gestion d'entreprise en Ligne

I admire this article for the well-researched content and excellent wording. I got so involved in this material that I couldn’t stop reading. I am impressed with your work and skill. Thank you so much. interior design courses online free

This is my first time i visit here and I found so many interesting stuff in your blog especially it's discussion, thank you. https://startupo.fr/course/193/