With crowds that continue to grow day after day, the 105.8-mile route from Steamboat Springs kept Levi Leipheimer (USA) of Team RadioShack in the overall lead and the Quiznos Leader Jersey for the third consecutive day. Heading into the final day of racing, the GC is lead by Americans with Christian Vande Velde of Garmin-Cervelo, Tejay Van Garderen of HTC-Highroad, Tom Danielson of Garmin-Cervelo and George Hincapie of BMC Racing Team rounding out the top 5. 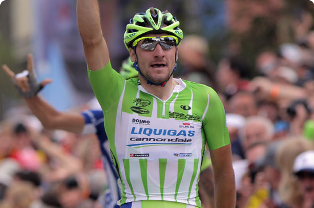 “If you look at the crowds in a place like the USA Pro Cycling Challenge, that is really saying something,” said Leipheimer. “I would definitely like to win tomorrow. We've done a good job so far and we just need to carry the momentum one more day.”

In another scenic stage filled with rolling hills, gorgeous backdrops and lined with fans, the route between the two famous ski towns – Steamboat Springs and Breckenridge – included the category 2 Rabbit Ears Pass and the category 3 Swan Mountain, as well as two intermediate sprint competitions.

As the riders headed toward the first KOM at Rabbit Ears Pass, just about 12 miles from Steamboat Springs, the group spread out and a lead group of approximately 20 riders formed. With huge crowds lining the road to the top of the KOM, Rafael Montiel (COL) of Gobernacion de Antioquia crossed the line first, followed by Beltran and Laurens Ten Dam (NED) of Rabobank Cycling Team.

On the descent and then the subsequential climb, a breakaway of five riders formed, including Schleck, Tom Peterson (USA) of Garmin-Cervelo, Ivan Basso (ITA) of Liquigas-Cannondale, Ten Dam and Javier Acevedo of Gobernacion de Antioquia that would stick for the rest of the race, with a lead of up to four minutes at times.

As the riders continued on their route to Breckenridge, they went through the first Smashburger sprint line of the day in Kremmling with Peterson hitting the line first, followed by Basso and Schleck. With the riders in the break taking turns pulling at the front, they crossed the second Smashburger sprint line of the day in Dillon with Schleck first, followed by Ten Dam and Basso.

The riders continued over a couple of rolling hills with great scenic views before making a sweeping right turn and heading toward the second and final KOM of the day on Swan Mountain, just about five miles from the finish.

Lined with some of the biggest, most enthusiastic crowds the race has seen thus far, Swan Mountain is a short but difficult climb that would provide one last obstacle before the stage finish. With different teams taking the lead in the field on the chase behind the break, Schleck attacked the group and crested the mountain first to take the KOM, followed by Basso and Ten Dam, some of the most notable climbers in the sport.

On the super-fast descent, the riders flew down the mountain at speeds of up to 60 mph, only a couple of miles from the finish line. Schleck broke away from the group for a bit, but was rejoined by the other breakaway riders and soon Peterson fell back to the chase group, but in an impressive move rejoined the break again shortly after.

With each of the three remaining riders making a play for the front, they were finally caught by the peloton in the final stretch to the finish line in Breckenridge. In an all-out bunch sprint to the finish to the roaring cheers of fans, Viviani crossed the line first with his hands in the air for his second consecutive stage win. Following closely behind were Castaneda and Oss.

“The crowds have been getting bigger and bigger with each day of the race and I believe tomorrow will have phenomenal attendance,” said Shawn Hunter, co-chairman and CEO of the USA Pro Cycling Challenge. “They've had a week-long celebration in Golden and we all know the significance of Lookout Mountain. I think Denver is going to be phenomenal with the circuit finish. “

Heading into the final day of the USA Pro Cycling Challenge the jersey leaders are as follows. Leipheimer retained the Quiznos Leader Jersey for the third consecutive day. Viviani kept the Smashburger Sprint Jersey for the second day in a row. Van Garderen kept the Sheets Best Young Rider's Jersey for the sixth straight day. The Nissan King of the Mountain (KOM) Jersey was once again awarded to Walter Pedraza Morales (COL) of UNE-EPM. And the Exergy Most Aggressive Jersey went to Schleck.

The final stage takes us along another highly anticipated route – the climb up and the descent down the treacherous Lookout Mountain, where the overall King of the Mountain winner will be decided.

The riders will start under Golden's famous “Howdy Folks” welcome arch, take a northern loop out of town, ride past the start line a second time, and then make the challenging ride up Lookout Mountain. At an average 6.1 percent grade and 1,300 ft. of elevation gain over 4.8 miles, this section provides an intense challenge on the tour's final day.

After a treacherous descent down the winding roads of Lookout Mountain, the cyclists are back again for a third time past the start line in Golden. With three opportunities to see the cyclists test their strength and strategy, the Golden start line will be one of the most coveted viewing spots of the entire race.

The racers then speed toward Denver, where they take six laps of a nearly five-mile circuit along Speer Blvd. before heading past the original Quiznos store at 13th and Grant to reach the finish line in Civic Center Park.

An exciting five-mile circuit and the monumental finish line will create the most-watched day of the race, leaving nothing to be desired as the first winner of the USA Pro Cycling Challenge is crowned in the “Mile High City” on August 28.