RealAspen News and Community Content Feed
By David O. Williams
Real Aspen – July 18, 2011
Eagle County's solid waste and recycling director last week clarified through a spokeswoman that he is not currently considering accepting pit liners from any oil and gas companies in Colorado and that such a decision would have to be made by the Eagle County commissioners.

In response to a recent Colorado Independent story, Eagle County solid waste and recycling director Ken Whitehead also pointed out his department has recommended no longer accepting any type of so-called E&P (exploration and production) waste from oil and gas companies.

Eagle County has been accepting other types of E&P waste, including drill cuttings mixed with drilling mud, sediments from water pits and soil excavated from underneath pit liners, since last year, but has not been approached to take the liners themselves. The soils come from one company, Denver-based Antero Resources, and are thoroughly tested according to state health and environmental standards, according to Whitehead. 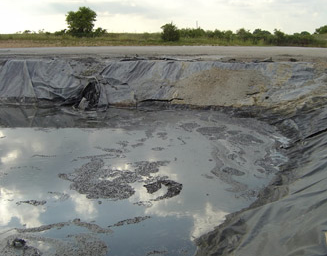 A lined natural gas waste water pit in the Marcellus Shale back east.
Photo by neighborsofeaston.blogspot.com.
The large, dense polyethylene pit liners were banned by neighboring Garfield County in July of 2009 because tests showed they can be coated in sludge containing toxins such as benzene, a known human carcinogen. The pits contain water produced during the natural gas drilling process, as well as hydraulic fluids stored for re-use in future frack jobs.

The decision to accept soils from drilling operations was made last year during the tenure of the previous Eagle County solid waste and recycling director. That type of E&P waste (mostly soil) was considered similar to other types of mining and construction soil and debris already being tested and accepted by the landfill at the time and so it wasn't a county commissioner level decision.

Eagle County Commissioner Jon Stavney previously acknowledged to the Independent the controversial nature of E&P waste but said it filled a “great gap” in revenue since the local construction industry collapsed in the wake of the global recession in 2008. Still, he said he expected all types of E&P waste to be phased out over time and added that any consideration of taking pit liners would definitely be a commissioner-level decision.

Taking pit liners seems highly unlikely now – even if a company did float such a proposal — and Eagle County spokeswoman Kris Friel said the Solid Waste and Recycling Department staff in June was directed by Whitehead to “create a balanced budget without revenue from E&P waste.”

“Moving away from E&P waste will also be a commissioner decision that has not yet been made, although it is the staff recommendation,” Friel said. “[The commissioners] will have a work session on landfill operations coming up in August or September and E&P waste will be discussed.”

In an earlier interview, Whitehead told the Independent he didn't know enough about the pit liners to draw a conclusion about whether the landfill should accept them. He did say there would be certain operational challenges to taking the liners, which are very large and bulky.

“I'm leaving it open right now but I don't know enough about the pit liners for me to make a decision,” Whitehead said at the time. “I want to go see what we're talking about. For me, I'm a hands-on kind of guy. I just want to go feel what I'm going to be working with.”

The pit liner issue has been somewhat of a political hot potato since new Colorado Oil and Gas Conservation Commission regulations went into effect in 2009 prohibiting operators from disposing of the liners by burying them on-site at drilling operations. The industry initially challenged the new regulations but later relented.