“I'm exploring ways to cutback regulation, including possible legislation to require a regulatory impact study — an RIS, similar to an EIS for environmental issues — and establish a joint House and Senate committee on regulatory oversight,” Tipton wrote in a guest column for the Grand Junction Daily Sentinel on Sunday.

Tipton, who represents the vast majority of the Western Slope in his 3rd Congressional District, has also floated legislation to strip the U.S. Environmental Protection Agency (EPA) of a significant amount of its regulatory authority. 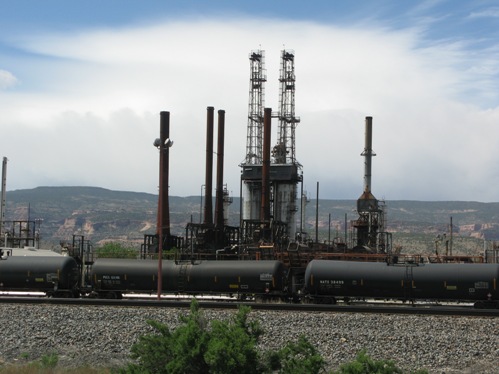 Monday the Colorado Oil & Gas Association — the primary lobbying organization for the industry in Colorado – responded to Polis's BREATHE Act:

“Our industry supports reasonable environmental regulation,” COGA President and CEO Tisha Conoly Schuller wrote in an email. “It is crucial that we carefully evaluate new regulation to ensure that it is adding additional safeguards and not simply providing impediments to economic development and affordable energy creation.

Polis, in a release last week, cited an ozone alert in Pinedale, Wyo., that shut down drilling operations in that area, and he said that increased drilling activity nationwide has led to a spike in emissions that in some areas is having adverse health impacts.

“The sheer number of wells has grown exponentially in recent years, and this growth correlates directly to an impact on regional air quality and resident health in areas of active drilling,” Polis said.

In Garfield County, the second most drilled county in the state, Battlement Mesa residents continue to push for increased county regulation over a proposed drilling plan that could see up to 200 new wells on public areas inside the subdivision. Garfield County is in Tipton's congressional district.

Paid for by the county and conducted by the Colorado School of Public Health using data collected in large part by Antero Resources, the Denver-based company proposing the Battlement Mesa drilling planning, the health impact assessment (HIA) is open for public comment until April 27.

In its executive summary, the HIA states that the “health of Battlement Mesa residents will most likely be affected by chemical exposures, accidents/emergencies resulting from industry operations, and stress-related community changes.” The HIA goes on to make more than 70 recommendations for mitigating those impacts.

Four of its recommendations, including full public disclosure of all chemicals used during drilling operations, should be implemented prior to the county approving a special use permit for Antero's drilling plan, according to the HIA. There are another 16 actions recommended as conditions of the county permit approval.

“I feel the HIA team has done an outstanding job of identifying the risks and making recommendations to minimize the negative impacts,” Dave Devanney of Battlement Concerned Citizens wrote in an email. “It will soon be up to our county commissioners to listen to the public health experts and heed their warnings.”

Antero was seeking a one-month extension to continue to review the second draft of the HIA, which has already been rewritten once to address industry concerns, and the commissioners granted that request in a meeting Monday afternoon.

Almost every single teaching hospital poses one or more very specific questions that they want residency applicants to answer. One has to assume that these questions were worded the way they were for a very specific reason(s). USMLE Preparation

This will be a good initiative for the people to know about all the news and happenings around the area. The offers will make them confident in evolving as a global organization with the assistance from such huge companies. CBD Patches

You can read these articles too they are also intresting:
Ivermectin for sale

After working together as Healthcare solutions provider for more than 8 years, our team founded Optimum resource medical billing services in 2019.
ORMBS is a professional medical billing and IT services provider based in California, servicing medical practices in all US states.
Contact Us

Era of Digital marketing is on the peak.
Satta game

Matka gambling or satta is a form of betting and lottery which originally involved betting on the opening and closing rates of cotton transmitted from the New York Cotton Exchange to the Bombay Cotton Exchange. It originates from before the era of Indian independence when it was known as Ankada Jugar.

The ziverdo kits is a new invention from USA that will change how people buy medicine. It's a drug-in-a-box used in pharmacies, convenience stores, and vending machines. So far, they're available at CVS, Walgreens, and Target.
The ziverdo kit contains five doses of ivermectin tablets and one dose of anti-malarial tablets. Although it's not yet available in the USA, it will help people save money and time when buying medicine.

All of these actions are very clear and can be witnessed through high quality colour images. NIPT