The Black Mountain Express lift will start running at 8:30 a.m. to take snow riders to the top of the intermediate High Noon trail at mid-mountain.

“This is a very exciting time for us, and all of Colorado,” A-Basin COO Alan Henceroth said in a press release. “We’ve had tremendous early season snowmaking and natural snow, and we can’t wait to kick off the 2013-14 ski and ride season.” 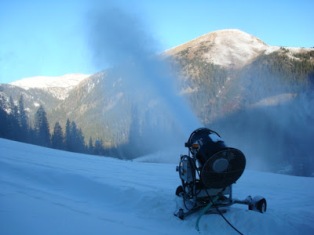 Snowmaking and natural snow will allow Arapahoe Basin to open for the season on Sunday, Oct. 13 (A-Basin photo).

Skier services that will start on opening day include ski and board rentals, dining at Black Mountain Lodge at mid-mountain and in the A-Frame at the Legends Cafe, and retail sales in Arapahoe Sports.

The $1 million renovation to A-Basin’s 6th Alley Bar & Grill is projected to last until late 2013, but a temporary bar will be set up in the A-Frame lodge.

A-Basin Mug Club sales will take place as normal on opening day. Mugs are $40 and entitle the owner to discounts in the 6th Alley Bar and a free beer to kick off the season. Mugs are sold on a first-come, first-served basis (one mug per customer).

Snow riders can get the lowest price on A-Basin lift tickets by purchasing them in advance at www.ArapahoeBasin.com. Current ticket window pricing will run through Dec. 20, with adult (ages 19-59) full-day tickets priced at $67, youth (ages 15-18) tickets priced at $55 and child (ages 6-14) tickets priced at $32. Children under age 5 ski free every day all season.

“We are very close to turning the lifts on, but we still have some work to do,” Loveland marketing director John Sellers said Friday. “The weather looks great for snowmaking this weekend and we could see some more natural snow too, so it won’t be long. We will know more after the weekend. We are optimistic we will open next week and should have an announcement early next week.”

Five to six inches of new snow fell in the Colorado high country Thursday and Friday, and another storm is headed into the state Sunday evening after a relatively clear day on Saturday, according to Opensnow.com.