A-Basin is typically one of the first ski areas in the state to open each fall (usually in October) and one of the last to close in the late spring, early summer.

Its originally scheduled closing day was Sunday, June 2, but resort officials extended the season by one more weekend, closing last week but opening back up Friday to Sunday, June 7-9.

“This Sunday, June 9, will definitely be closing day,” President and COO Alan Henceroth wrote on his blog this week. “Joking and teasing aside, Sunday will be the last day. No more extensions. Come on out and join the fun.”

Despite recent warm temperatures, Henceroth says the mountain is holding up nicely. 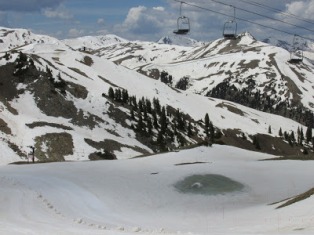 For more information about A-Basin’s closing weekend, go to their website.

Forecasters are calling for a chance of afternoon storms on Friday but a generally hot and dry weekend after that.

For this situation you will start it is essential, it again creates a site a solid noteworthy web webpage: โชคดีบาคาร่า

I'm constantly searching on the internet for posts that will help me. Too much is clearly to learn about this. I believe you created good quality items in Functions also. Keep working, congrats! N95 Face Mask

Great post but I was wondering if you could write a little more on this subject? I’d be very thankful if you could elaborate a little bit further. Thanks in advance! 먹튀검증사이트

I think this is definitely an amazing project here. So much good will be coming from this project. The ideas and the work behind this will pay off so much. ufabet ทางเข้า

Thank you for helping people get the information they need. Great stuff as usual. Keep up the great work!!! slotxo thai

Took me time to read all the comments, but I really enjoyed the article. It proved to be Very helpful to me and I am sure to all the commenters here! It’s always nice when you can not only be informed, but also entertained! weight loss for women

I was surfing net and fortunately came across this site and found very interesting stuff here. Its really fun to read. I enjoyed a lot. Thanks for sharing this wonderful information. สูตรเซ็กซี่บาคาร่า

Your post is very helpful to get some effective tips to reduce weight properly. You have shared various nice photos of the same. I would like to thank you for sharing these tips. Surely I will try this at home. Keep updating more simple tips like this. บาคาร่า SA

Wow, this is really interesting reading. I am glad I found this and got to read it. Great job on this content. I like it. บาคาร่า w88

I would also motivate just about every person to save this web page for any favorite assistance to assist posted the appearance. เล่นสล็อตออนไลน์

Yes, I am entirely agreed with this article, and I just want say that this article is very helpful and enlightening. I also have some precious piece of concerned info !!!!!!Thanks. สล็อตออนไลน์

Hello, I have browsed most of your posts. This post is probably where I got the most useful information for my research. Thanks for posting, maybe we can see more on this. Are you aware of any other websites on this subject. 5 minute bookkeeping

Thanks for writing such a good article. Keep it up! more

Mmm.. great to be here in your article or post, whatever, I figure I ought to likewise buckle down for my own site like I see some great and refreshed working in your site. voyance par telephone

An obligation of appreciation is all together for posting this data. I basically need to disclose to you that I essentially take a gander at your site and I find it outstandingly captivating and instructive. I can barely wait to examine lots of your posts. sideboard

This article gives the light in which we can watch the truth. This is exceptionally decent one and gives indepth data. A debt of gratitude is in order for this decent article. acrylic laser engraver

"pg slot I really like your forum. There is also an important story in case you don't want to miss can apply at slotgxy888
pg slot"