U.S. Rep. Cory Gardner, R-Colo., is calling for an investigation into how federal roadless area policy related to bark beetle-killed trees may have contributed to the spread of the 46,600-acre blaze, The Fort Collins Coloradoan reported on Monday. But the congressman's statements are drawing fire from his opponent in the Fourth Congressional District, Colorado Senate President Brandon Shaffer.

“It's unfortunate that he wants to politicize this fire,” Shaffer told the Colorado Independent on Tuesday evening. “Right now we need to band together and focus on getting the fire out and taking care of the people and the animals that have been displaced. There's no room for politicking in that cause.” 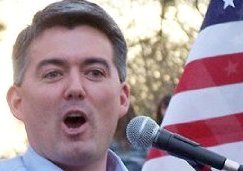 Whether it's in poor taste to so quickly drag the roadless area debate into a tragedy that has claimed one life, destroyed over 100 structures and displaced residents isn't where the controversy ends.

There are at least 39 published studies on how beetle-killed trees influence wildfire behavior and many of them are contradictory. University of Idaho scientist Jeffrey Hicke and researchers from the U.S. Forest Service analyzed all of them and found some agreement but major disputes over key issues.

The authors found changes to fire behavior after a pine beetle outbreak “may only occur under some environmental conditions. For example, effects may be manifested during intermediate wind speeds (Simard et al., 2011) or in moister conditions, such as earlier in the fire season (Steele and Copple, 2009). Past controversy on this topic can be partly recon­ciled by this consideration of more specificity about study ques­tion, time since outbreak, and fuels or fire characteristic when describing results,” their analysis (pdf) said.

Thomas Veblen, a University of Colorado geography professor, has said “the knee jerk response from the public, politicians and many forest managers was that dead trees would result in a great increase in fire hazard.” He pointed to a study that demonstrated dead trees ignite at the same rate as live ones.

Still, yet another study from a U.S. Forest Service ecologist asserts that red pine needles on beetle-killed trees contain one tenth the moisture of healthy green needles and therefore ignite much faster.

Climate change, which scientists say has ushered in the bark beetle epidemic, is projected to trigger more wildfires in most of North America and Europe over the next 30 years as temperatures rise and droughts intensify, according to a study released this week.

The High Park Fire, which started from a lightning strike on Saturday and was 10 percent contained as of this morning, is believed to have burned through the eastern edge of the White Pine Mountain Roadless Area in the Roosevelt National Forest. Much of the fire has been on private land.

“The next step here is to have a clear focus on forest management and to recognize the dangers that we face in our own backyard with beetle-killed wood. Not knowing whether or not roadless policies contributed to the severity of the fire, that's a question that has to be answered,” Gardner said.

There are about 154,000 acres in Larimer County — where the High Park Fire is located — and over 4 million acres of forest across the state under the purview of the Colorado Roadless Rule, which was finalized in May after years of stakeholder input and debate about how to manage beetle kill.

“The High Park Fire inevitably will start a discussion about past efforts to clear beetle-killed trees,” U.S. Sen. Mark Udall, D-Colo., said in a prepared statement. “It is neither feasible nor realistic to blame the U.S. Forest Service for the epidemic, or to expect all the dead trees to be cleared.”

Nevertheless, the timing of Gardner's comments isn't sitting well with his adversaries.

“People's lives and homes remain in jeopardy,” Colorado Democratic Party Chairman Rick Palacio said. “Our firefighters and first responders are still on the line with a huge job ahead of them. We need to be doing everything we can to support their work, and now we get this distraction and politicization from Congressman Gardner. This is completely inappropriate; he owes Coloradans an apology, and he needs to start figuring out how he can play a productive role in helping our friends and neighbors at this time.”