RealAspen News and Community Content Feed
By Troy Hooper
The Colorado Independent – May 21, 2012
Colorado's conservation community deemed the 2012 state legislative session a success last week after it saw a half dozen bills it supported pass and 15 efforts to undermine the environment thwarted.

“Despite the midnight madness at the end of the session, the environment emerged a winner,” Colorado Environmental Coalition Executive Director Elise Jones said.

“In the face of numerous attempts to unravel Colorado's progress on clean air and water, citizens convinced the legislature to hold firm. Coloradans across the state sent a clear message to their lawmakers: We want to continue Colorado's leadership on renewable energy, we love our outdoor heritage and access to our public lands, and we want strong protections from oil and gas impacts at all levels of government.” 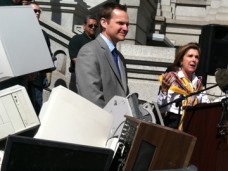 State Sen. Gail Schwartz speaks about new legislation that bans computers, TVs and other other electronics from landfills as Randy Moorman (left) of the Colorado Environmental Coalition looks on. (Photo by Troy Hooper)

“We said in January that this session was about creating jobs — and the conservation community delivered by creating an estimated 2,500 jobs and keeping thousands of tons of hazardous electronic waste out of our landfills with the passing of the bipartisan Electronic Recycling Jobs Act,” said Pete Maysmith, executive director of Colorado Conservation Voters.

"This (electronics recycling) legislation will stop the flow of dangerous electronic waste into Colorado landfills, while ensuring easy options for consumers to recycle their old components. It will create jobs, help the environment, and make it easier for us all to reclaim valuable storage space taken up by old electronics," said Joanne Kron, executive director of ProgressNow Colorado.

Conservationists worked with administrators and legislators to secure funding for the Governor's Energy Office (HB 1315), maintaining the state's leadership in renewable energy. Colorado has created an estimated 21,000 new sustainable jobs and led the nation in solar jobs per capita.

Other victories in the state legislature hailed by conservationists include HB 1032, which continues the forest restoration program for five more years; HB 1050, which extends tax check offs for non-game and endangered wildlife; and HB 1028, which extends funding for low income energy assistance.

“Coloradans know that renewable energy like wind and solar is the future and they want to go forward, not backward, and shift to clean energy and reducing pollution from fossil fuels,” said Jeanne Bassett, Environment Colorado's senior associate. “Thankfully, the legislature heard us and responded by refusing to weaken our nation-leading clean energy policies. While these steps reaffirmed the legislature's commitment to Colorado's clean energy leadership, more needs to be done. We are now counting on our elected officials to help bring more clean energy to Colorado."

The list of so-called “anti-conservation” bills defeated in the state this year is long:

HB 1322 – A bill forcing the federal government to sell treasures such as the Colorado National Monument and Maroon Bells to the state, potentially ending access to over 23 million acres of public land.

HB 1121 - Permits the PUC to waive the renewable energy standard.

HB 1103 - Permits counties to exempt themselves from auto emissions testing as part of compliance with ozone standards.

SB 126 - Extends time new vehicles are exempt from air pollution inspections from 4 to 8 years without scientific evidence to show that these vehicles do not break down and pollute as they age.

Thought it was great, temporarily no opinion!