Shiffrin was also the top junior on the day ahead of a surging Lila Lapanja (Incline Village, Nev.) and Paula Moltzan (Lakeville, Minn.). Shiffrin is a Vail Valley local and Burke Mountain Academy product. Moltzan skis for Ski and Snowboard Club Vail. 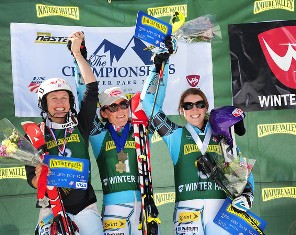 "I love skiing in the U.S.," said Shiffrin, who climbed on her first World Cup podium this season. "Winning a race is great, but to be able to drive home and sleep in my own bed is really comforting. There's certainly an advantage to that."

"I remember being one of the young kids running up to get an autograph from athletes like Lindsey Vonn or Sarah Schleper, and I truly can't believe that kids are now looking for my autograph," Shiffrin said. "I hope that I'm able to inspire them as much as the other girls on the U.S. Ski Team have inspired me."

Shiffrin hopes to build on her breakthrough season with strong results -- possibly even wins -- on the World Cup circuit next season.

"It was an amazing season," Shiffrin said. "I hoped for podiums and top 10s in slalom this season and I'm really excited to continue skiing well in Winter Park. Hopefully I can put down some fast runs in giant slalom too. It's always so much fun to race in Colorado and this is a great way to end great World Cup season."