The Bureau of Reclamation Small Conduit Hydropower Development and Rural Jobs Act, aka H.R. 2842, passed by a vote of 265-154. It will face a tougher test in the Democrat-controlled Senate where more legislators will be opposed to language in the bill that exempts small hydropower projects on Bureau of Reclamation property from National Environmental Policy Act (NEPA) review.

Tipton, R-Colorado, and the bill's supporters, which included over two dozen Democrats in the House, held the legislation out as a way to facilitate reliable domestic energy production while expanding development of clean, renewable energy that can create jobs. 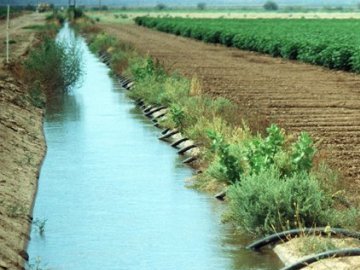 An irrigation canal on farm land near Durango that could be harnessed for small hydropower.
U.S. Bureau of Reclamation photo

"Hydropower is the cheapest and cleanest source of electricity," Tipton said in his floor speech. "It's the highest source of non-carbon emitting energy in the world accounting for approximately 69.9 percent of the United States' total renewable electricity generation, making it the lead renewable energy resource power, according to the [National] Hydropower Association. In Colorado, nearly 30.7 percent of our renewable energy is hydropower, but only 3.1 percent of all Colorado energy is hydropower. We have a significant opportunity... to expand on this clean renewable source of power while creating badly needed jobs for the Third District of Colorado in the process. In Colorado alone, there is enough existing capacity to generate as much power as the Glen Canyon Dam. However, as it stands, no major hydroelectric facilities have been built in many years."

Bureau of Reclamation Deputy Commissioner of Operations David Murillo has said the bill's goals are admirable, but his agency opposes a NEPA exemption, which would apply to projects of 1.5 megawatts or fewer.

Tipton has responded that his bill will reduce the overall regulatory burden and therefore the total costs to build small hydro projects on Bureau of Reclamation land.

The House rejected an attempt by Rep. Grace Napolitano, D-California, to remove the NEPA exemption from the legislation. A day earlier, it struck down an amendment offered by Rep. Keith Ellison, D-Minnesota, that would have prevented the law from going into effect until it was determined the bill would not have unintended consequences, specifically a net loss of jobs.

If the bill were to become law, it would give Tipton something to hang his hat on this election season. The freshman congressman's tenure has been derided as largely ineffective. There have been plenty of bumps along the road, including a recent campaign violation disclosure, an apology to the House Ethics Committee for his daughter's name-dropping while seeking telecommunications clients on Capitol Hill, and money his office spent with vendors for a company his nephew owns.