RealAspen News and Community Content Feed
By David O. Williams
Real Aspen – March 6, 2012
Early in the winter of 1957 it took Vail founders Pete Seibert and Earl Eaton four hours to slog through knee-deep powder on skis with climbing skins to the future site of Mid-Vail. There they stopped for a lunch of cheese, salami, bread, and hot tea in a Thermos before heading on to the top of Vail Mountain and Seibert's first view of Vail's future Back Bowls.

A U.S. Army 10th Mountain Division ski trooper badly wounded fighting the Nazis in Italy, Seibert was accustomed to alpine hardships, but even he was impressed by the rigors of their climb that day. This season at Vail, 55 years later, skiers, snowboarders and even foot passengers are able to ride the high-speed Vista Bahn chairlift up and have lunch at the new 10th restaurant very near where Seibert and Eaton stopped for their simple lunch that fateful day.

A 160-seat, 13,000-square-foot restaurant just above the existing Mid-Vail restaurants at the base of the Challenger and Look Ma runs, the 10th serves up something in short supply at Vail and most North American ski resorts: sit-down, table-service dining on the mountain. Views of the Gore Range from the dining area, 40-seat bar and 40-person patio area are nearly as good as the food, and that's something the late Seibert would have appreciated. 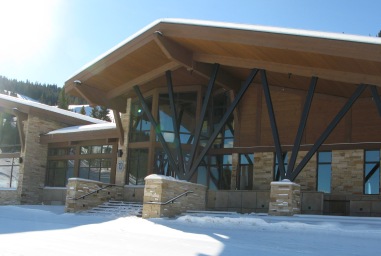 “It was a moment of pure bliss,” Seibert wrote of that lunch spot in his book “Vail: Triumph of a Dream.” “Everything sparkled in the sun. I envisioned a line of skiers charging down through the virgin powder, making braided tracks and kicking up rooster tails of snow as they swooshed past and disappeared into the woods, doing quick turns through the trees. Across the valley we could now see the Gore Range, mile after mile of great peaks of rock and snow.

“My God, we've climbed all the way to heaven,” I said to Earl.

Indeed, North America's largest single-mountain ski area at 5,289 acres does just keep getting better. Last season it added its 16th high-speed quad chairlift – the wildly popular High Noon Express (Chair 5) in Sun Down Bowl – and this season it unveiled a dining experience for snow riders needing to rest quads burned in those Back Bowls. Next season the Vista Bahn chairlift will be replaced by a gondola straight the 10th, providing better access for dinner service.

Seibert's vision for Vail was formed in the early 50s in the Alps of France, Italy and Switzerland, where he used the G.I. Bill to learn “from the Swiss the fine art of hospitality and service” at the famed L'Ecole Hoteliere school. Seibert loved the European tradition of intense skiing mitigated by a long, lavish lunch with good friends. The American tradition of self-service, cafeteria-style dining gets skiers back out skiing, but doesn't allow much time for soaking in the on-mountain ambience. Vail's only sit-down, table-service dining last season was the smaller Bistro 14 atop the Eagle's Nest Gondola at the far western edge of the massive mountain.

“The 10th definitely fills a need for more sit-down dining at Vail -- something more in the middle of the mountain,” said Vail spokeswoman Liz Biebl. “The access is great on the Vista Bahn, and the main dining area faces the bases of Chairs 3 and 4 with views of the Gore Range.”

All these years after Seibert's dream was realized and Vail opened on Dec. 15, 1962, Vail Village and the Vista Bahn are undeniably still the main portal onto the mountain, especially with the opening of posh hotel, retail and condo projects such as the new Four Seasons, Solaris at Vail and the redone Sebastian at Vail. Lionshead runs a close second with the new Ritz-Carlton Residences and Arrabelle at Vail Square.

The other two portals onto the mountain are Golden Peak and Cascade Village, each with its own parking and lift access, and Vail Resorts has entered into the approval process with the Vail Town Council on a fifth portal in West Lionshead – the much-anticipated, green-built Ever Vail base village, which will include a new hotel, shops, parking garage and a third gondola. It's hoped the project will spark yet another renaissance after Vail's real estate slowdown in recent years.

But what it really will do is create more buzz at the base of the mountain – yet another core area of activity after the ski day is done and an interconnected destination during the ski day. That was the other part of Seibert's European ski vision: recreating the village-to-village touring aspect of alpine skiing.

Seibert started that process in the 1970s when he acquired the land for Beaver Creek, and he helped bring it full circle when he returned to Vail after several years at Snowbasin in Utah and helped developed Arrowhead ski area near Edwards. That resort was ultimately absorbed into Beaver Creek and is part of the Interconnect that runs through Bachelor Gulch.

Although still years from completion, Ever Vail is expected to bring in the vibrancy, energy and obvious economic benefit of an additional 2,400 destination guests a day when it's finished, 1,000 of them new skiers. And that's on top of a 10-percent increase in skier days during the 2010-11 ski season, when Vail shattered its all-time snowfall record with 525 inches at mid-mountain.

Because of slow start in November and December, this season has seen significantly less snowfall so far, but the powder has been flying since mid-January, and exhausted snow riders have enjoyed having the 10th as an oasis at Mid-Vail to rest tired quads and refuel on everything from veal meatloaf to pheasant pot pie. Go to the Vail Resorts website for more information, a full menu and to make reservations.

All of the information I've gleaned from it has been quite useful, and I'd want to commend you on your abilities. 토토 웹