“I didn't really have a good feeling from the very beginning,” Vonn said. “My balance and my energy wasn't quite there. I've been struggling with being sick and I'm trying to find my strength again.” 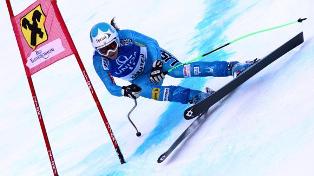 Mancuso scored her best downhill finish since winning at the World Cup Finals last March. The Olympic gold medalist has now been on the World Cup podium in downhill, super-G and giant slalom this season.

“It was very difficult and I was hoping for the win, but you had to hold on and fight,” Mancuso said. “It was set pretty straight at the bottom, so you can go really fast, but you pay for it if you can't hold the line.”

Vonn now leads Austria's Marlies Schild, a slalom specialist, by 151 points in the overall hunt, and Goergl by 286 points. Defending overall champions Maria Hoefl-Riesch is seventh and Mancuso is eighth in the overall chase.

“I'm really happy for Julia with second and for Liz Goergl for winning at home,” Vonn said of today's action. “I'm still happy with fourth considering where my strength is, but Lizzy and Julia skied really well and deserved to be on the podium.”

A super-G is scheduled for Sunday in Bad Kleinkirchheim.