He only had one mission in mind and that was to force his GOP opponents to take a stance on illegal immigration.

But his run for governor of Colorado is different.

“The difference is when I was running for president, I really thought we had candidates who were competent,” Tancredo told Real Vail's sister site, Real Aspen, in an interview Friday. “That's not the case in this race.” 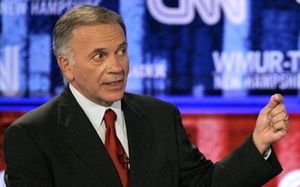 Particularly problematic for the outspoken former five-term Republican congressman is the GOP's choice for governor, Dan Maes, who, in Tancredo's view, is a bum — a no-good, lying bum at that.

So undesirable is Maes to Tancredo that he decided to run for governor at the eleventh hour, dropping his decades' long affiliation with the Republican Party to join the American Constitution Party.

Tancredo told Real Aspen he is convinced Maes recently asked GOP supporter Freda Poundstone for money saying he needed it because he was a couple of months behind on his mortgage and that now Maes is lying about it. (At first Maes told The Denver Post he wasn't sure whether Poundstone's money was a gift or a campaign contribution, but now says it was the latter. He also claims Poundstone gave him $300. Poundstone claims Maes is lying and that the sum she gave him is greater than $300.)

“The Republican party fielded a candidate for this office that is completely wrong,” Tancredo said in an interview Friday with Aspen resident Mike McGarry that will be airing on GrassRoots Community TV next week.

In the beginning, Tancredo had a horse in the race, Josh Penry — “a young dynamic, I thought up-and-coming star in the Republican party,” he said — but his horse dropped out. When the GOP was left with just Maes and former Western Slope congressman Scott McInnis, who became immersed in a plagiarism scandal, Tancredo said he grew concerned for his party and started thinking about running.

“At the time Scott McInnis was a much better pick and in fact today he is,” Tancredo said. “I recognize all of Scott's problem but I'm telling you, in comparison to what we've got … When they were the last two standing and we became aware of the problems Scott had, and I was certainly aware of the problems Maes had, I said just make a public statement that on Aug. 10 if you're not ahead of Mayor Hickenlooper (the Democratic gubernatorial candidate), you will resign and we'll put someone in who will win. They chose not to, so when it came time I thought to myself there is no way I can possibly sit here and watch this shipwreck occur.”

Now he is the gubernatorial candidate for the lesser known American Constitution Party.

“The odds are not great. Historically that's been the case for third-party candidates,” Tancredo told Real Aspen. “But this has been a strange year for politics in Colorado.”

Born in Denver, Tancredo has come a long way in his political career. At the age of 16, he was hired to sweep the park at Elitch Gardens, where he returned when the weather warmed year after year, and was soon promoted as summer manager. He stayed with Elitch's for 10 years. Working at an amusement park was fun and it helped him pay his way through college: two years at a junior college in Sterling and then another two years at what was then called Colorado State College but is now University of Northern Colorado in Greeley where he studied education. In 1970, he became a junior high school civics teacher at the highest-paying school district in the state, Jefferson County, where in nine months he said he made $6,000, which he laughed is the exact same as he made in three months at Elitch's.

But it was in the classroom that Tancredo launched his political career.

One day he gave his civics class an assignment: If they were to get involved in a political race or campaign, he would run for office. He thought it might motivate 10 students. But it motivated all 32.

So he put a list on the chalkboard of various offices he could run for: city council, mayor, county commissioner and so forth. Ultimately he and his students decided on state legislature. He ran and won.

After two terms in the Colorado House of Representatives, in 1981 then-President Ronald Reagan appointed Tancredo head of the regional office of the U.S. Department of Education in Denver where he stayed on through 1992 with the first Bush administration. He went on to serve five terms in the U.S. House of Representatives where he rose to national prominence for opposing illegal immigration.

That he sat down with McGarry in Aspen reinforces the old saying that “politics make strange bedfellows.” McGarry is a friend of former Gov. Richard Lamm, and both are on the Colorado Alliance for Immigration Reform advisory board, along with former Aspen City Councilman Terry Paulson. Tancredo and Lamm, a Democrat, have been political foes in Colorado dating back to the 1970s.

One of the more candid moments in McGarry's interview with Tancredo was when he asked him about legalizing marijuana. Tancredo said he is opposed to the drug war — a position he took up last year.

“Do you want to?” McGarry interjected.

“Not really. I take about two glasses of wine almost every night with dinner. That's as far as I go,” Tancredo laughed. “The reality is this: The war is lost. I don't know that anyone out there can say to me let's just keep doing what we're doing. If you want to deal with this problem, take the money for the cartels out of it. You legalize it, you tax it, you make it a horrendous penalty to sell to children and, all of a sudden, the ratio of profitability to risk becomes too great. If someone has a better idea, let me know. I'm happy to listen but what we're doing does not work.”

Tancredo also revealed that he and his wife, Jackie, who taught at the same junior high school when they met, were married in Aspen in 1977. So he's fond of Aspen even if he's not sure of its politics.

Tancredo mentioned Aspen in his discussion of “sanctuary cities,” which by his definition are ones where local law enforcement doesn't report all illegal immigrants they contact to federal authorities.

“We have lots (of sanctuary cities) in Colorado and this may be one, I can't remember for sure,” Tancredo said. “It is against the law – against the federal law and the state law – for a city to actually tell your police force or sheriff's department that if you have contact with a person who is here illegally, you will not report that to ICE. That's a sanctuary city. … There is a law. Enforce that law.”

The last message Tancredo put out in Aspen is that he is for “less government” and “more freedom.”

“There will be no taxes without the vote of the people — you can call them fees, it doesn't matter, they're taxes. No more fees or taxes imposed on the people of this state without their vote,” he said.

Colorado is quite lucky to have Tom Tancredo, he is an exceptional man. I met him in Phoenix in 2004 and as I shook his hand, I said "I'll always remember this hand shake, you're go to be President some day." He just smiled and said "you think so?". Before he entered in to the last presidential race, he was quoted as saying "I'm too short and too bald to be president".
I guarantee the people of Colorado, Tom is running for governor for the betterment of your state, not his ego. I only wish he lived in Arizona.

Go Tom Go!!!! Colorado needs you desperately. Dan Maes lied about campaign contribution. Refuses to take the lie detector test when challenged by the Donor Freda Poundstone. He has mishandled the finances of the campaign. After all these baggage, his wife is the treasurer of his own campaign. Dos it not look like the fox guarding the chicken house? When a man cannot handle his own finances ethically, how can we entrust him with a huge budget for our state? It is time for Dan to do some self analysis and quit the race. Tom Tancredo is clean. He has integrity. He is the only one who can challenge Hickenlooper. Dan Maes supported Amnesty before he opposed it. He is soft towards illegal immigrants. Tancredo and Pat Miller will make an excellent team to restore our economy,stop illegal immigration, balance the budget and lead the state. GOP has deserted the most qualified candidates like Bob Shafer, Marc Holtzman and Tom Tancredo. It is the GOP which is in big disarray for deserting Tancredo. So, you may be democrat, you may be a republican. You may be an independent. Tom needs you all. All of our problems in the state are caused by the massive illegal immigrants. Tancredo alone will fix this and take back our jobs from the illegals. Either volunteer for his campaign or send money to his campaign please. Colorado needs Governor Tancredo!!!!!!!!!! www.tancredofor governor2010.com

Aspen is close to being a sanctuary city as Tom states, but it is officially NOT on the list of Colorado's Sanctuary Cities at the accepted Sanctuary City website

Here are the Colorado cities that are on the Sanctuary City list (last upated on 8/27/10):

This is his personal opinion, if the chances of success are greater than the failure then there is no point of excuse. Read more about argumentative essay topics education for a details and never miss to become the member today, I wish to help you if you need some support, come and join my network. Wishing you all the best.

The interview is so special with so much meaningful information, well, if you want to make some changes you can check our network. Read my research papers on child abuse and provide me your feedback with us, we have been doing this for the last couple of years, if you need some support you can follow us right now.

We strongly recommend you to go through our network and follow our practicals that we are delighted to share with you all. We have some information regarding online synthesisessaytopics.com website that is something unique and guiding so many people around the globe. If you like our network you can go through the same, I hope you will like our network and contribute as well.