The Associated Press reported the move in the wake of ongoing concerns by regulators about the inability of some wastewater treatment plants to handle fracking fluids that sometimes contains elevated levels of radium and other radioactive materials.

The New York Times, in a series last February, exposed the problem and revealed deep concerns by state regulators in places like Pennsylvania, where drilling in the Marcellus Shale has come with a wave of fracking that has overwhelmed some wastewater treatment facilities. 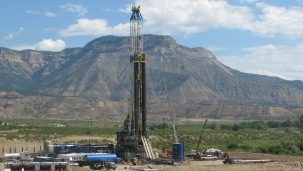 The process, used in about 90 percent of all natural gas wells, injects up to 1 million gallons of water underground under very high pressure. The water, which includes sand and a chemical cocktail that often remains secret for proprietary reasons, forces open rock and sand formations and frees up more gas or oil.

In Colorado, U.S. Reps. Diana DeGette and Jared Polis have been trying to pass the Fracturing Responsibility and Awareness of Chemicals (FRAC) Act that would compel oil and gas companies to publicly disclose chemical constituents. DeGette has also raised the alarm about the use of diesel fuel in fracking mixtures.

Most fracking fluids are treated and recycled or injected into disposal wells deep beneath the groundwater table. Those wells are now a source of controversy because scientists believe they could be linked to earthquake swarms in places like Arkansas, where several wells were shut down recently.

In Colorado, where regulators have been working through a backlog of old spill enforcement cases, officials have said disclosure of fracking fluid chemicals won't necessarily stop accidental leaks associated with faulty pipelines, well casings or pit liners meant to keep fluids stored for reuse from leaking into groundwater.

The EPA conducted a study of fracking before Congress voted to exempt the process from the Safe Drinking Water Act when it passed the Energy Policy Act of 2005. Now the EPA is conducting what many scientists hope will be a much more thorough examination of the process, including using a test area in Colorado. The agency is also considering drafting tougher air quality standards for fracking operations.

The state of Colorado expects to draft its own fracking-specific disclosure regulations by the end of the year.

Wonderful blog! I found it while surfing around on Yahoo News. Do you have any suggestions on how to get listed in Yahoo News? I’ve been trying for a while but I never seem to get there! Appreciate it. 123movies.com

Thanks for this great post, i find it very interesting and very well thought out and put together. I look forward to reading your work in the future. online casino

Your articles are inventive. I am looking forward to reading the plethora of articles that you have linked here. Thumbs up! situs judi slot online terpercaya

I recently came across your blog and have been reading along. I thought I would leave my first comment. I don't know what to say except that I have enjoyed reading. Nice blog. I will keep visiting this blog very often. A Different Version

I am continually amazed by the amount of information available on this subject. What you presented was well researched and well worded in order to get your stand on this across to all your readers. Courses